Global warming or not, this winter we've had more snow than usual.
My pampas grass seems to be holding up nicely. Is that a black panther sneaking up on me ? 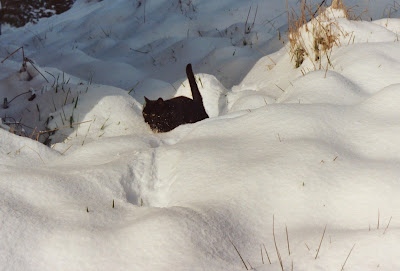 Ah no it's my cat , Kedam, plowing through the snow. 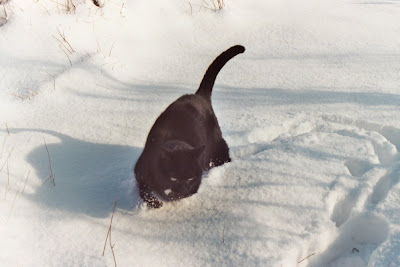 With the sun out, I pack up the camera and go for a walk .
A short five minute walk takes me to the open fields behind the village where I live. 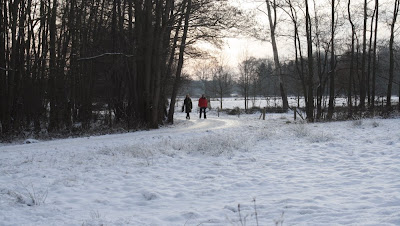 Cows graze here in summer, now it's all snow up to the horizon.

The rivers are frozen over , 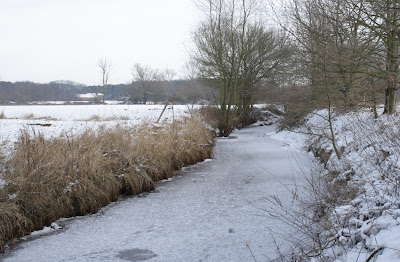 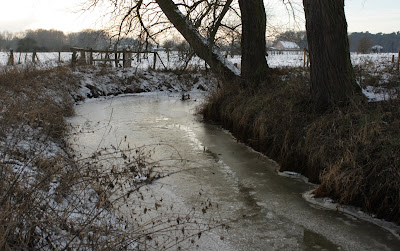 with a few places where the flowing water has cut through the ice. 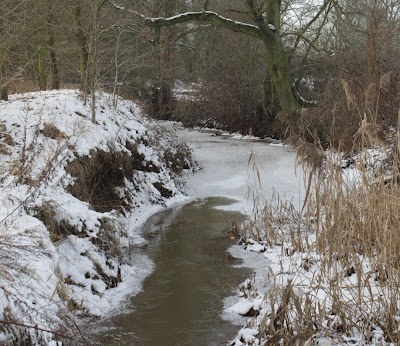 The do it yourself snow-mobile. 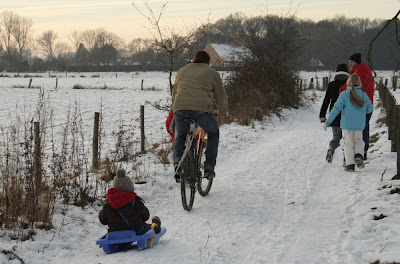 As the sun starts to set , temperatures drop : time to head back home.

The setting sun colours everything in shades of bronze and russet. 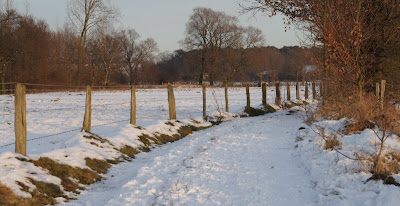 ( As always , click on the pictures for a larger view ) 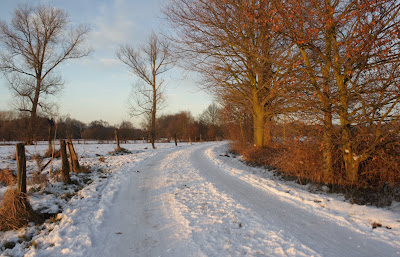 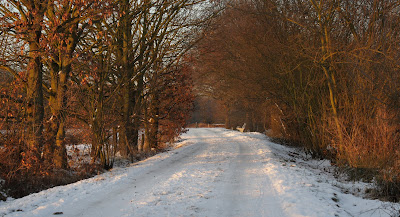 The sun has almost set and I'm almost home. 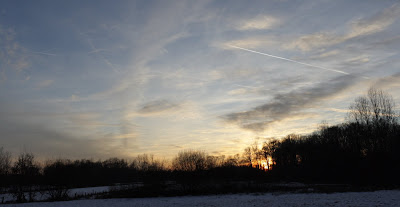 I promised a while ago to present a traditional dish from my country that could be cooked abroad. Here it is.

Foreign dishes can be hard to cook for many reasons : unfamiliar , hard to get ingredients , unfamiliar cooking techniques and cooking utensils.

This very traditional Flemish recipe should be do-able for most people.

Basically it's a very hearty stew of beef and onions in beer.

The finished dish can be frozen in portions for later, reheated quite simply (microwave !) and you can eat it with cooked or pureed potatoes or French fries or slices of brown bread.
I find it goes very well with Japanese style steamed rice ( click photo to see a larger version). 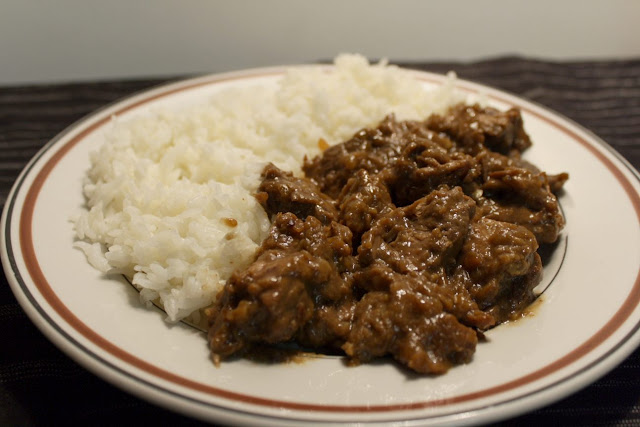 No vegetables ? If you eat it after a vegetable soup like leek or spinach, you'll have a very complete and balanced meal.

The following ingredients are for 4 servings (in Belgium! Could serve 5 or 6 in other countries ))

1 kg of lean unsalted cooking meat ( this beef  is sold in Belgium mostly precut in cubes and made from the brisket or neck : it's a tough but very nutritious and lean meat, that needs long slow cooking to get tender )
3 medium sized onions
1 heaped tablespoon of brown sugar
1 tablespoon of plain flour
1 large bay leaf
1 sprig of thyme
100 grams of unsalted butter
1/2 liter of good brown beer
1 good slice of bread
1 tablespoon of mustard (Dijon or another hearty one)
pepper
salt

3 hours of your time ( although 2,5 of those are spent letting the food simmer , so you can spend them doing other stuff around the kitchen )

Where are the brisket and the neck ? See below 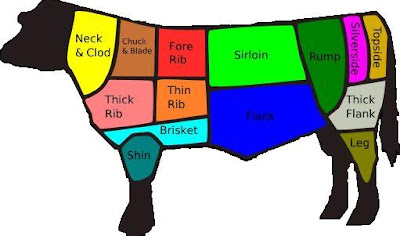 I use these red onions because they've got a good flavor. Yellow ones are good too, but don't use the very large ones ( they're too weak and sweet tasting ). 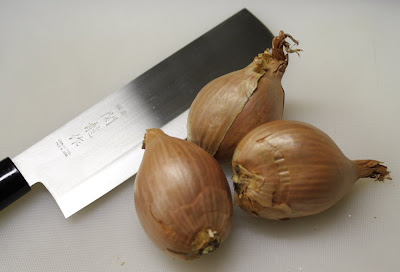 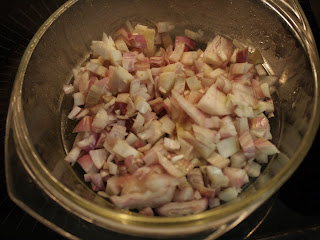 (Here I use 1 and a half tablespoon of olive oil instead of butter because
a) I almost never use butter in the kitchen
b) I am Flemish , therefore I am allowed to (haha)
c) it doesn't change the flavour of this dish
d) olive oil is healthier
e) I made this on a Sunday and couldn't get butter from the shops

Add the beef cubes and brown them lightly on all sides ( moisture comes out from the cubes : keep stirring to let most of it evaporate ). Use a large pot ! This one's 27 cm across.
If you have a smaller pot or larger amounts of beef , brown the beef cubes in portions, otherwise the pan will not get hot enough and your beef will not get browned , but start to cook. The browning is important for the taste. 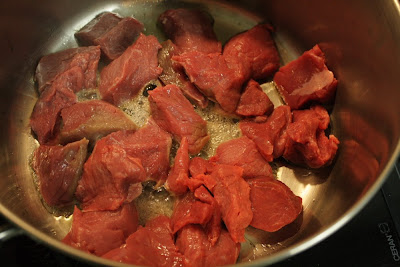 Tip the browned cubes of meat in a dish and sprinkle the flour over them ( you could also do this after they go back into the pot later)
Turn the heat down a bit and put the onions in the pot.
Keep stirring them till nearly glazed in the fat left behind by the meat. Add a little butter or oil if needed.

Sprinkle the brown sugar over them and stir for a minute to color the onions. 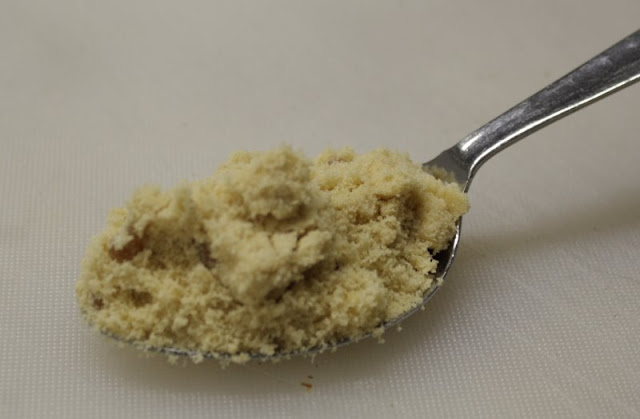 See how nice and brown the onions have become ? 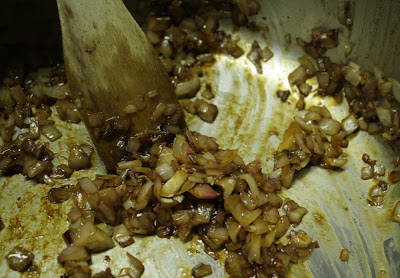 Add the spoon of vinegar and stir.
Put the beef back in the pot and add your beer. It will foam a lot when you pour it in but that's OK.

Use a Belgian brown beer , NO OTHER BEER will do ! 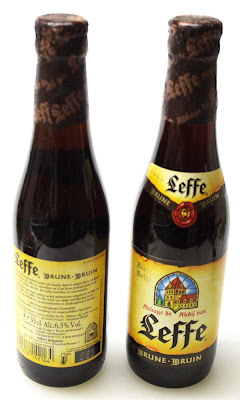 Seriously, use a good tasting brown beer . Don't use a low alcohol table beer : too sweet. Don't worry about the alcohol : at the end it will all be gone. Kids can eat this dish : they'll love it.

Season with five to six turns on your pepper mill and a few pinches of salt. Put in the thyme and the bay leaf. The beer should cover most of the meat. 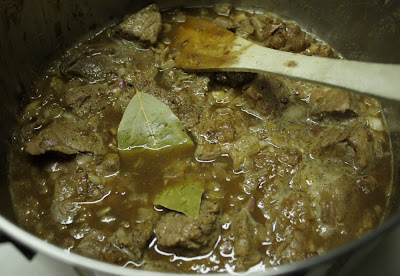 Turn down the heat ( electric setting 3 out of 12) , put the lid on and let simmer quietly for an hour.
After that , the smell when you lift the lid will be tantalizing. Trust me it will get even better.
Don't worry that the meat is still very tough at this point : you're only halfway.
Spread the tablespoon of mustard ( use Dijon or another hearty mustard ) on your slice of bread and put it on top of the meat with the mustard side down.
(DO USE a self baked full grain brown bread like me ! White bread is for WIMPS ! And toothless old people !) 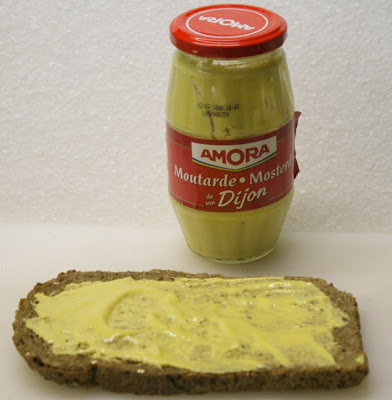 The bread will bind the sauce , the mustard aids in flavoring and tenderizing the meat.
Since it completely dissolves , you can use white or brown.

I keep the heat fairly low and add a little beer ( a few tablespoons ) at this point if I find it's becoming a bit dry.
Later on , use water or the beer taste will be too obvious.
Check from time to time and stir.
Make sure it doesn't get too dry and starts burning , which can happen because there's now flour from the bread in the stew : burning would ruin the dish.

You can tell by seeing how tender the meat has become : it should come apart easily ( see photo ) but not completely fall apart : you're not making a sauce. Taste it and let it stew longer if you feel it's not tender enough.
You can see in this picture that it's still quite moist. 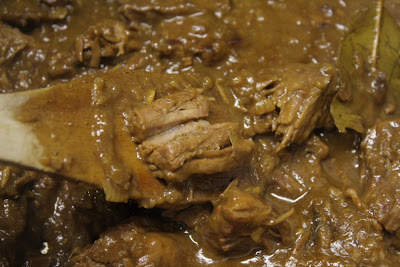 I like serving this dish with the same beer I've cooked it with. 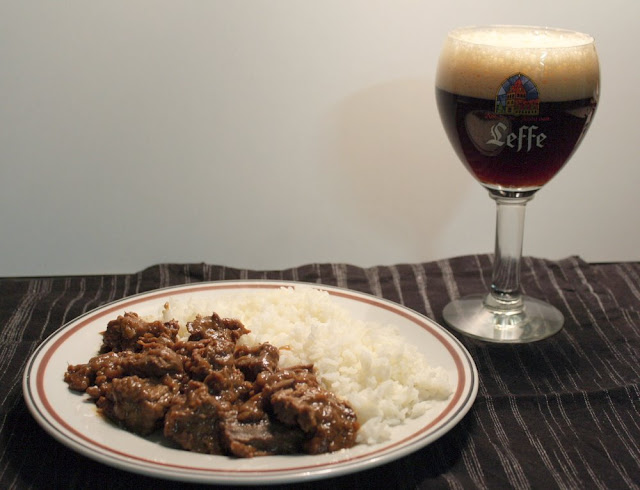 Have fun and let me know how it went !

(I've found many variations of this dish on the web ( especially on Dutch sites) . FORGET about those , they're all FAKES ! This is the ONLY REAL ONE ;)
Actually, as with most traditional dishes , the recipe varies slightly in several parts of the country and from cookbook to cookbook.
This recipe comes from an out of print cookbook from 1984 (no longer available and only printed in Dutch) that compiled 125 original recipes from all over Flanders ( the Flemish speaking part of Belgium).
Tip : use a flat bladed wooden spoon for this kind of dishes : it's a lot better to stir food that's sticking to the bottom of the pan. You can use the high tech non stick one ( I have both ) but I can buy ten of the wooden ones for the price of the other ;)