Together with the mushrooms from my post on Japanese hotpot , I also bought these. 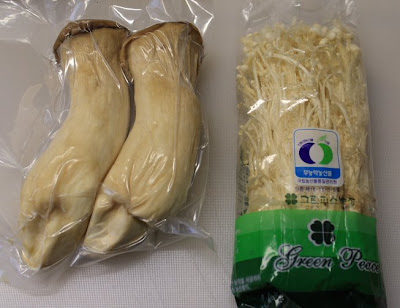 The enokitake ( the ones on the right ) I split in 8 bundles about 2 cm thick, wrap them tightly in a thin slice of bacon and grill them on a very lightly oiled very hot grill plate both sides till the bacon is crisp ( eight minutes about). Cut them in half , arrange them like in the picture. Serve with some ground white pepper and a slice of lemon.
This is an original Japanese dish called obimake enokitake (obimake because the bacon resembles the obi that is wrapped around a kimono ). 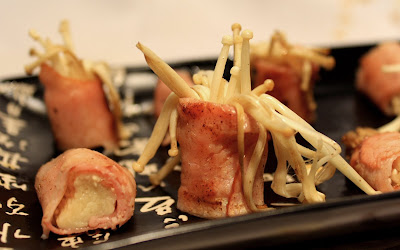 ( click on the picture for a larger view : you can almost smell them! )


The insides are juicy and go quite well with the saltiness of the roasted bacon.
Easy to make and a lovely appetizer before a larger meal. I love eating these!

The large ones are king oyster mushrooms. These were new to me so I sliced them in half from top to bottom and grilled them slowly on a lightly oiled grill plate for at least 10-15 minutes till they felt softer to the touch. Nice taste.
(Sorry no pics of the cooked ones : they were eaten too quickly :)

( Tip : if you want to photograph foods that cool down quickly like these for your blog , arrange the camera and the lights at the table before you start cooking, so you can arrange the food on its dish , whip it in front of the camera and take your pictures right away without your lovely food going all cold.)
Bye!
Posted by Walter at 20:32 8 comments:

Winter approaches and after reading Kirin's post on Nabe Ryori ( see also her Comments on my post ) I had to have a go at a Japanese hot-pot. ( Do click on the pictures : the large sized pics look even more appetizing).
Because it's my first time I keep the recipe simple and the dinner crowd small ( once I know my way around a recipe I can add more ingredients and guests).

To serve two I made a soup base with 1.5 litres of dashi and 1.5 tablespoons of red miso. I seasoned it by adding some finely grated ginger ( less than a tablespoon I guess) a bit at a time, tasting the soup base till the ginger was noticeable but not overpowering and also added some drops of sesame oil. 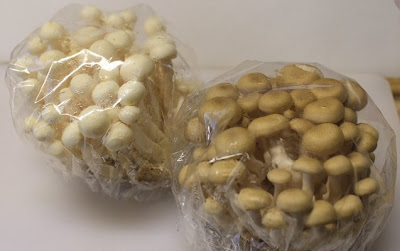 The vegetables that go in are these lovely brown shimeji that I found at the Chinese supermarket ( they're from Korea , imported via the Netherlands (it's a small world ;) I'm keeping the white ones for another dish) , Chinese cabbage leaves , cut in bite-sized squares, sliced shii-take, sliced spring-onion. I put everything in the simmering base , adding the shimeji a few minutes later, because I want to keep these from overcooking. 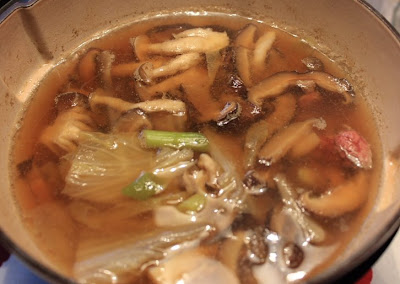 I served it in a fondue pot ( mine has a ceramic interior and I kept the pot simmering at the table with a small alcohol burner underneath ) . I added the finely sliced beef at the table for effect ;).

The Nabe with the meat added : it's very lean so only needs to cook shortly ! Tastes best when it's still a bit rosy inside. 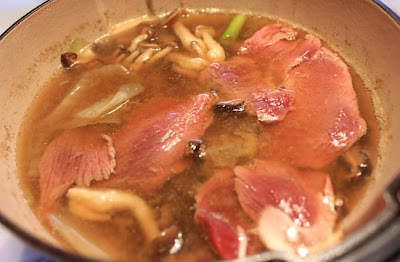 When everyone had eaten all the goodies from the pot, I added green soba and tofu to the broth. You can see the result below : the taste of the broth by then was to die for ! ( Tip : I had pre-cooked the soba , adding the same amount of cold water to it a few minutes before it was done , so it would be cooked just right after simmering in the pot together with the tofu. ) 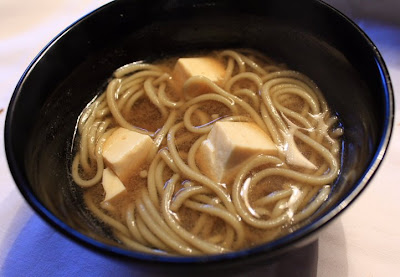 Nabe is a wonderful dish to experiment with. I can really recommend it.
Posted by Walter at 22:54 2 comments: