Chicken with forty cloves of garlic

I've come across this fascinating ( FORTY cloves ! ) recipe more than once in the past in many cookbooks , always wondering what it would taste like and this weekend I finally made it happen.

A lot of versions of this traditional French recipe can be found on the internet, but I went for the most traditional one.
And for those who are too scared to try this : NO, your house or you will NOT smell of garlic for the next two months, in fact it hardly smells at all while cooking and you won't have garlic breath after eating it !

I used a Mechelse koekoek , which is a famous special Belgian breed (since 1898 ! ), known for good laying and tasty flesh. It's also known to be a good natured and well behaved breed.
( picture copyright www.mechelsekoekoek.com 2013-..)

By the way , the one in the picture is a rooster, who is way bigger than the chicken I used :) 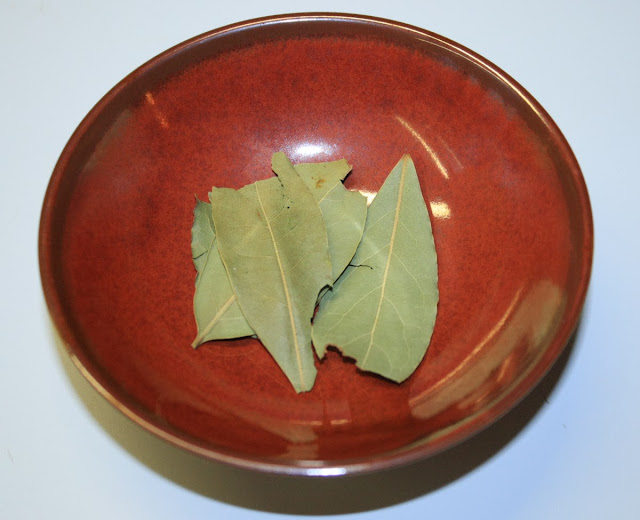 About 3  whole garlic bulbs for your 40 cloves : cut the end off each clove and peel the cloves ( lots of recipes suggest unpeeled cloves and the cloves do get really soft, but they are much easier to handle after the cooking when they're peeled ).
When you start peeling , it's a good time to start preheating your oven to 180° C
Use an oven thermometer ! Almost all ovens lie ! Mine needs a setting of 205 to get to 180 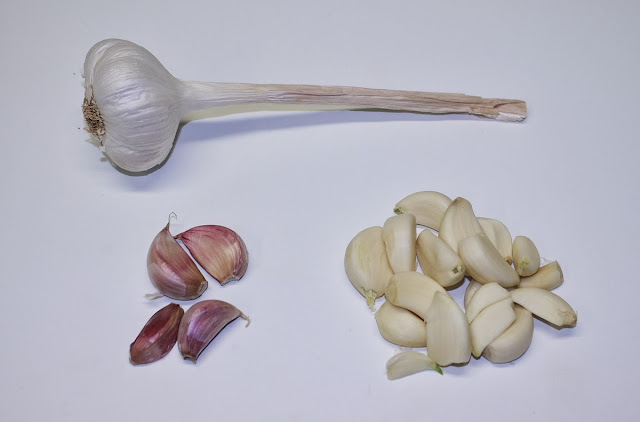 I still had lots of garlic in honey ( one of my three garlic tsukemono ) so I decided to try adding 20 of these to see what they would taste like. 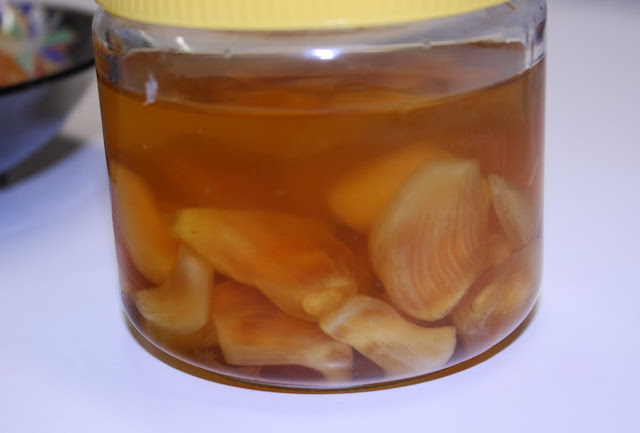 I rinsed off the honey : they still taste very much of garlic even after spending 3 months in honey, even though they look glazed. 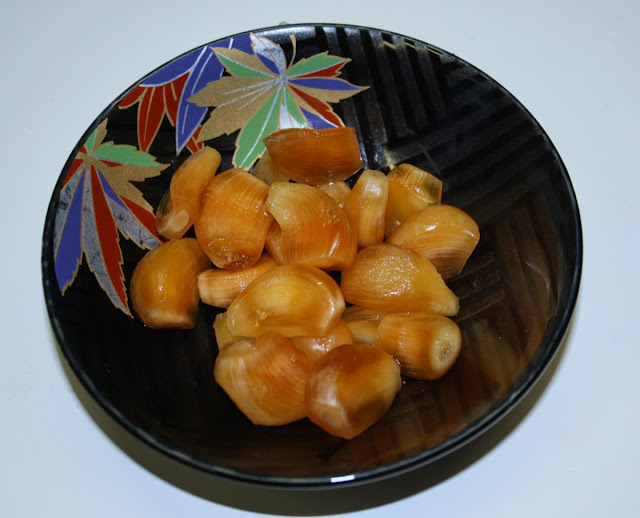 Put the bay leaves in the chicken. Oil the chicken well, sprinkle with salt and pepper all over and put it in a solid iron pot. Put the remainder of the oil in the pot.
You could also use an earthenware or steel pot , I just 'happened' to have this robust pot so I can cook things over an open fire outside :) 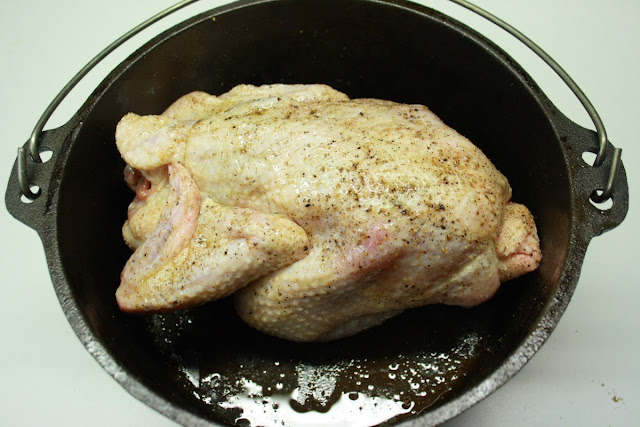 Traditionally , to keep the steam inside , the lid is sealed to the pot with a ring of dough.
To make this, put 100 grams of plain flour in a pot and add about 40 grams of water to start. 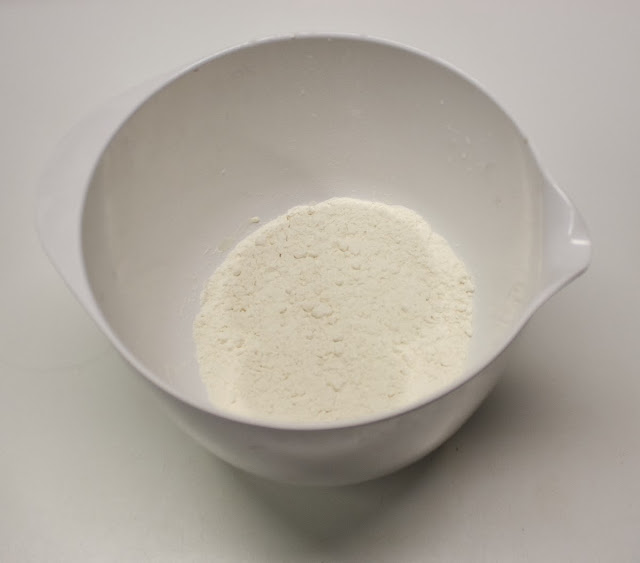 Now you can finally use those kneading pins of your mixer !
Start mixing till all the flour has been absorbed and if required add water one spoonful at a time till you get a nice flexible dough that bounces back when you knead it. Knead for at least a minute more to make sure the dough is completely mixed through. You can also knead it by hand for a few minutes. If your dough is sticky , it's too wet : mix more flour into it. 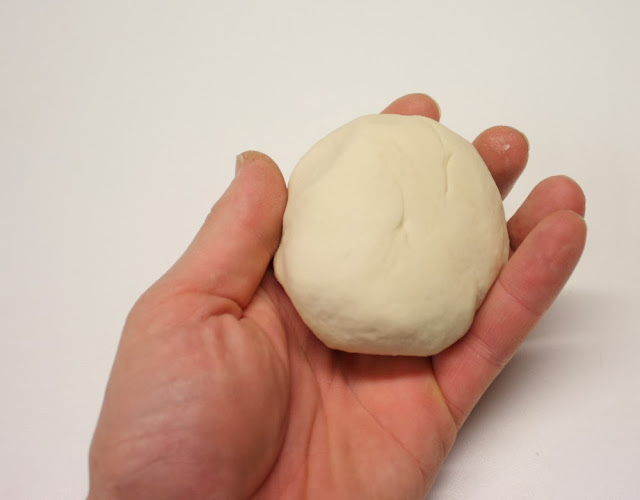 Make sure your hands are clean and dry to roll the dough : no need to spread flour all over your tabletop ( and kitchen floor ^^ )!

Roll the dough into a large sausage that will go around the top of your pot. 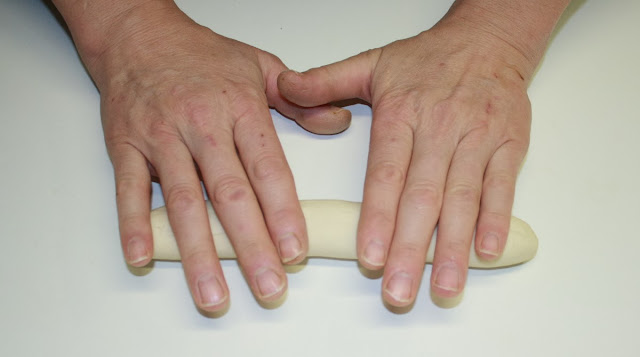 That takes me about half a minute ^^ . The dough roll should be long enough to go around your pot with some overlap. Put it all around , so it hangs over the inside and the outside.
If it's too short , don't pull on it, it will spring back, just take it off and roll it a bit longer. 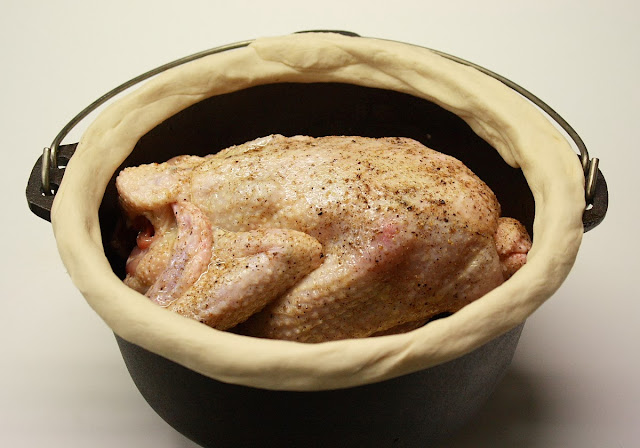 Put all the cloves around the chicken  and don't forget to pour the wine in ! 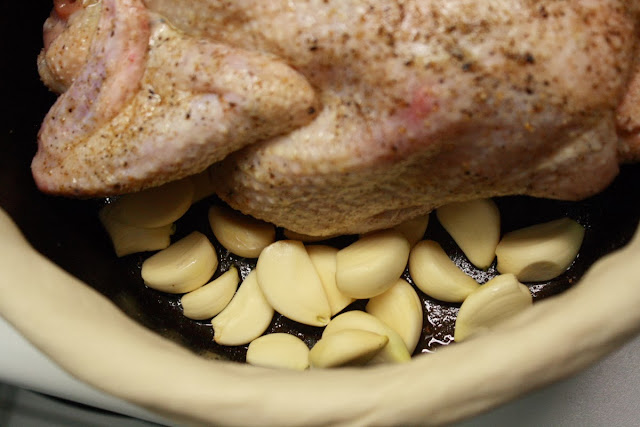 Put the lid on and press it down, so the seal is tight. 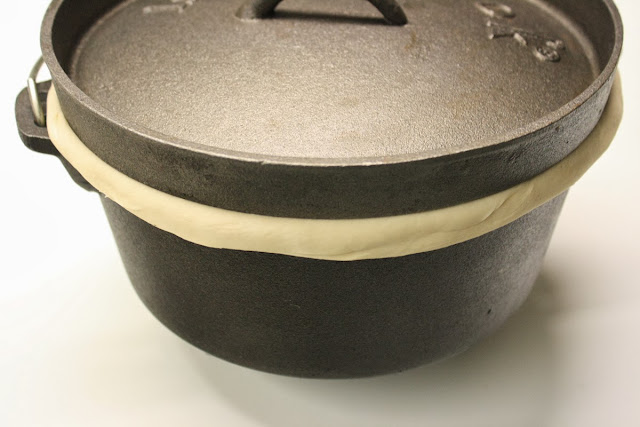 Put in the middle of the oven and cook for about 1 and a half hours ( or 1 and three quarters if you have a ceramic pot) at 180 degrees C (measured with a thermometer).
It will look like this : the dough seal is all hardened. 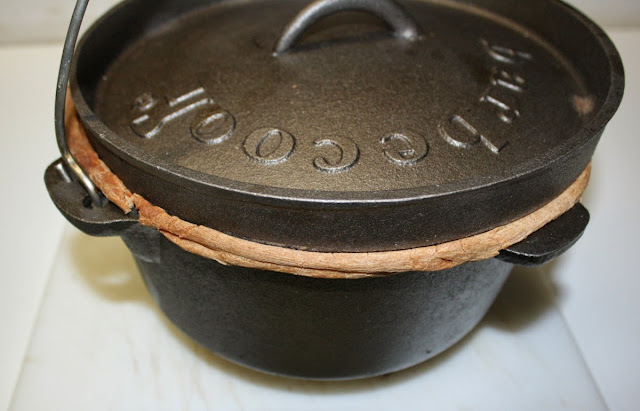 Pry the lid off : a delicate smell of moist , soft chicken comes wafting out. The skin will be totally soft ( here it even opened up , which tells me it's well done ! ) 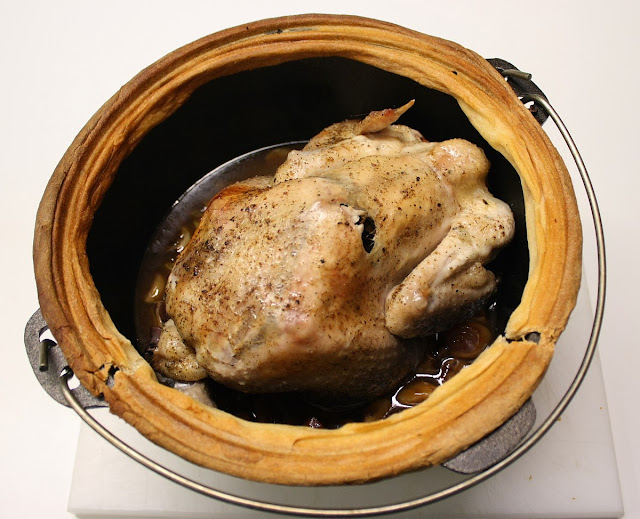 Take the chicken out and carve it up , whichever way you like.
Pour the sauce in a sauce pot : there's a lot of fat riding on top of it , which you can skim off if you like it less fatty.

The sauce taste very nice , make sure everyone at the table gets some !
Because I used red wine , it turned a rather bland grey brown , but the garlic and wine flavour is very subdued, not what you would expect after using forty cloves.
I put some of it in a white bowl for this photograph, you can see the fat on top. It looks a bit more grey in real life ^^. 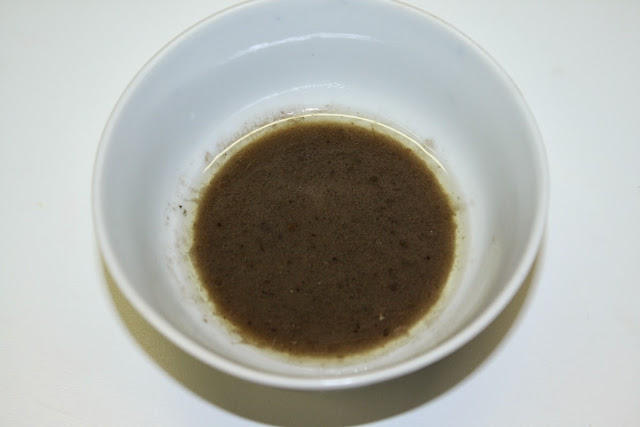 Carefully lift out the cloves with a spoon : they are very soft. ( the purple spots are from the red wine I used )
To eat with your chicken , put them on bread ( French baguette or whatever bread you like )
( the orange one on the left is one of my honey tsukemono garlic cloves : it still has a lightly sweet flavour, which I find interesting) 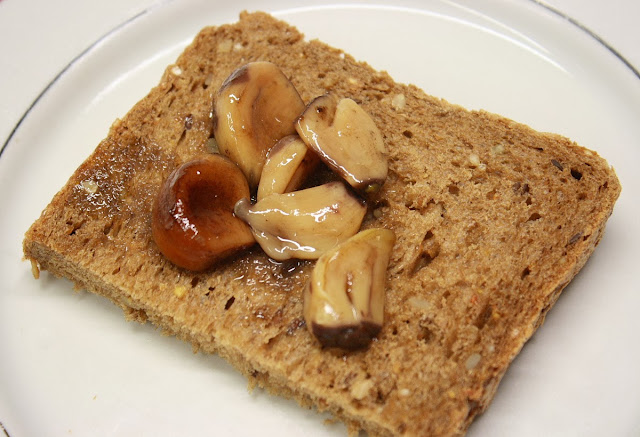 They are so soft , you can spread them out with a spoon. 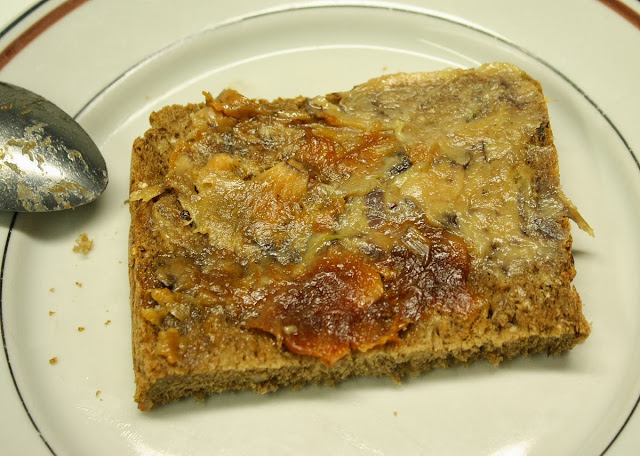 Dip your bread in the sauce, it's heavenly !

You can serve this chicken with some steamed green beans , if you want some vegetables with it. Personally I prefer to have a nice vegetable soup as a starter.
The delicate garlic flavour was a surprise to me : maybe next time I'll try a 100 cloves.

Wow,this is a grand feast,Walter!
And these ingredients are really selected one,for example,this Belgian breed chicken!
The combination of garlic and chicken must be very good.
I want to try this garlic tsukemono,too :)
Thank you for sharing this recipe,Walter!

Thank you, Kumiko! I'll make a post on my garlic tsukemono soon, although it would be better late summer, when garlic is freshly harvested.