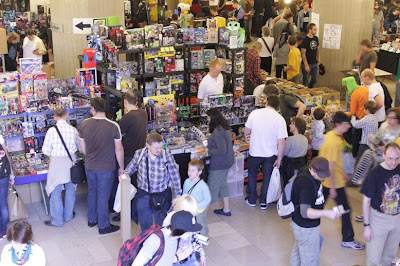 FACTS is an event held every year in October in Ghent (Belgium) where ALL real fans meet to get overdosed on 7000 square meters of Fantasy, Anime , Comics, Toys , Space , famous guests, food, beer ( hey, it's in Belgium ;).
Thousands of visitors come each year to this genuine mekka where shops from Belgium and abroad display and sell their wares. Despite it's success , large distributors and companies are requested not to attend. 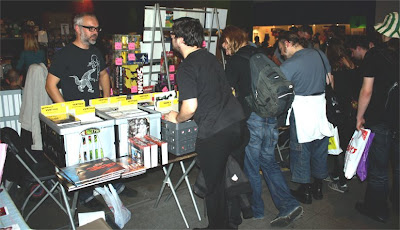 This is Jean , an acquaintance of mine, who runs the popular shop "De Stripkever" in Mechelen , that sells comics, strips, manga , anime and figurines.
It also has a counter and tables out front where you can sit down and drink coffee, tea, eat pancakes ( or have a beer ).

The cosplay competition isn't limited to Anime and Manga characters. This place is unique : only here will you find so many characters from Stargate , Star Wars and other movies shoulder to shoulder with the likes of Naruto and Inuyasha. 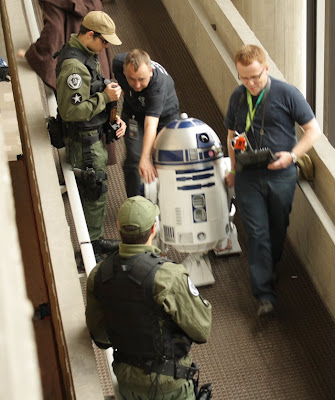 Picture above : R2D2 (the robot) from Star Wars driving down the ramp while on the left two soldiers from Stargate let him pass.

Do I even need to introduce this pretty character ? Isn't she just totally kawaii ? かわいい ね?

( For those of you who've been living in a galaxy far , far away (pun intended) these past 10 years and have only just now arrived on planet Earth, this is Haruno Sakura , the female lead and ninja from the very popular Naruto anime and manga )
( I've watched an episode of the anime and , frankly , 'our' Sakura is definitely prettier ! )
(click on pictures for larger version)

The three lovely ladies in the picture below are from left to right Yuko Ichihara (xxHolic) and two characters from Vampire Knight ( someone from the night class whose name I can't remember ( read : failed to find on Google ) and Shizuka Hiou ). 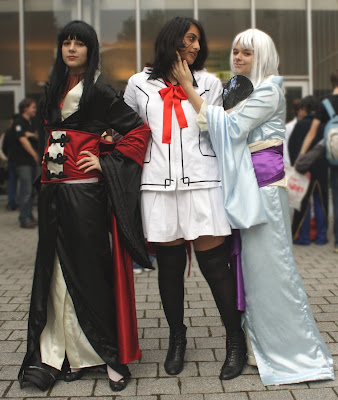 Here's a cute character that showed up in the corner of one of my pictures ( I didn't notice till I started editing them.) I'd really love to know which character she is : anybody any ideas ?

Hi Walter,
Do you like anime & cosplay, maybe Akiba?
I don't know much about those, but I know there are many foreigners who like anime come to Akiba (Akihabara, Tokyo)to cosplay or buy comics or figures. Akiba has become such an international place with people from any nationalities before I know. Akiba & Harajuku (both are the name of the place in Tokyo) are 2 major spots that attract foreign tourists always. But if you want to explore traditional Japanese culture, you should head for Kyoto. ;)

Thanks for the comment , Kirin, always nice to hear from you.
I like anime and manga and many other things ( life's too short).
Any manga or anime fan ( I'm not a die hard fan yet : I've been known to go for long walks in the sun ! )
knows about Akihabara ( rumor has it , it's not as 'hot' as it used to be )
When and if I visit Japan I'll definitely go to Kyoto. And places like Aokigahara (Jyukai). I'm not too hot on crowded cities but I love nature and Japan has so much of it!

Aokigaharajukai!! Scarely & dangerous!!
That's one of the famous spots as people go to commit suicide! Even people not intend so, yet feel like so. This is because of the ghost. If you just wanna enjoy nature, there should be better places.

Kirin-chan, don't worry.
I am only interested because Aokigahara has an ice cave and a wind cave, and past the standard trails, is a very pristine forest (there's so few left)
The ghosts make you commit suicide ? I thought it all started with the novel Kuroi Jukai by Matsumoto, which made the Sea of trees 'popular' as a suicide spot.

I've traveled through plenty of forest , while I was in the Army and we didn't have GPS back then, just a compass.
I've never seen a ghost. Now I'm really curious...

Please keep following my blog, I'm editing my pictures for a local dish and my recent visit to Tokyo promotion day.