During the day , several traditional live performances were taking place at a small stage
( against a background of Hokusai's beautiful ' Fukugawa Mannenbashi Shita' print).
The first one I saw, was a Shishi-mai ( Lion-dance) by the group Arigato Shishi , which is performed at shrine festivals and New Year , to ward off evil spirits and bring good luck, bountiful harvests, etc..
The Lion , portrayed by a very flexible actor wearing a shishi-gashira, or lion's head,
is accompanied by a flute player and a drummer and performs all sorts of acrobatic moves on stage.
( click on the pictures for a large version ) 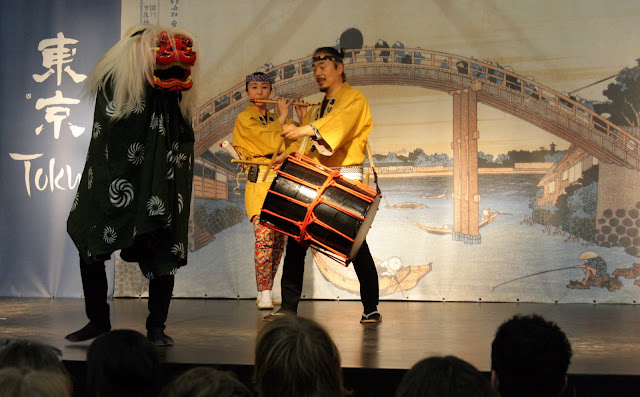 At one point during the dance the Lion apparently seems to settle down for a nap
and it takes quite a bit of serious clapping with the fan ( by the flute player , who has donned a mask) 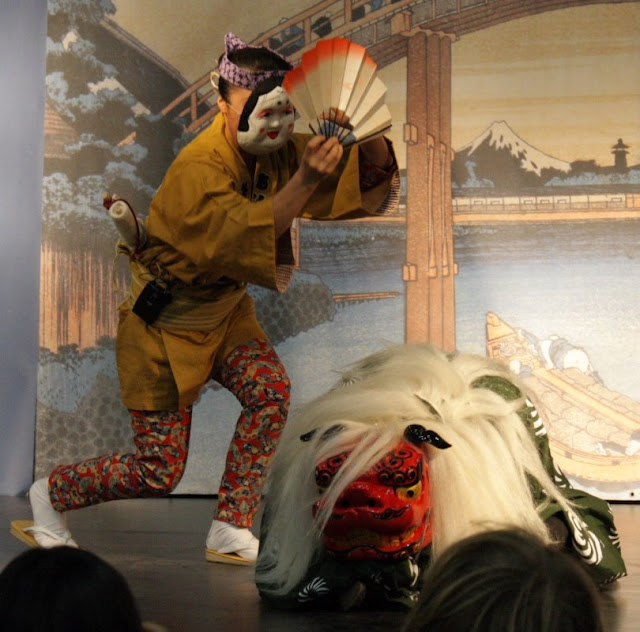 and hefty drumming to get the Lion to wake up again. 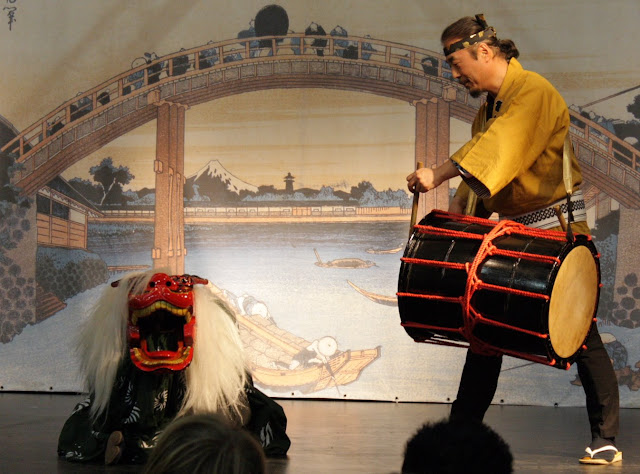 Near the end of the dance , the Lion comes into the audience and 'bites' people on the head,
which is supposed to bring you luck all year long. I visited this performance twice, but no luck for me this year : I didn't get 'bitten'. 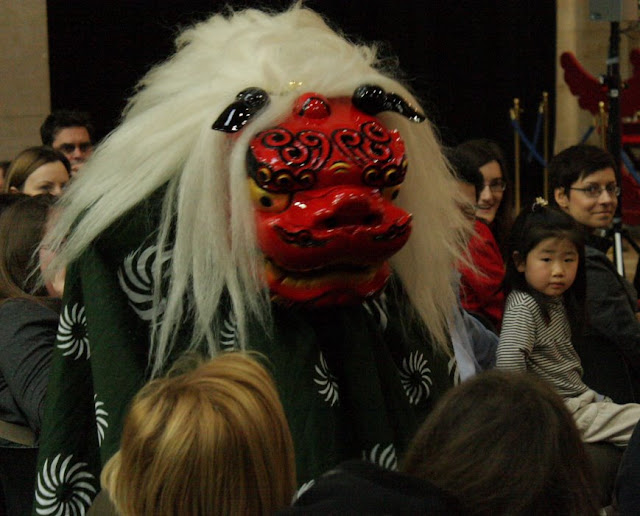 Next was a traditional Nihon Buyo ( Japanese dance ), performed by Nakagawa Chie, who's been studying folk and traditional dance from an early age, performing around the world. 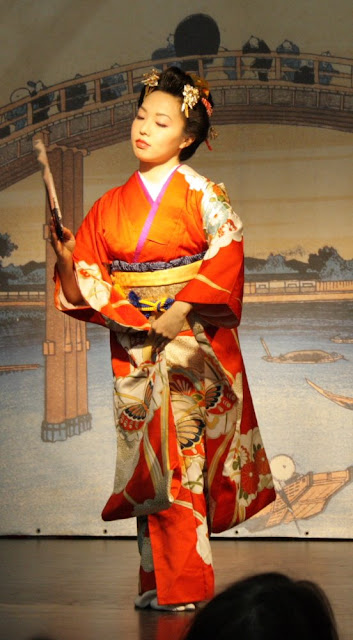 With no more than a kimono and a fan , she managed to entertain me thoroughly for the entire period of the dance. It was quite fascinating ! 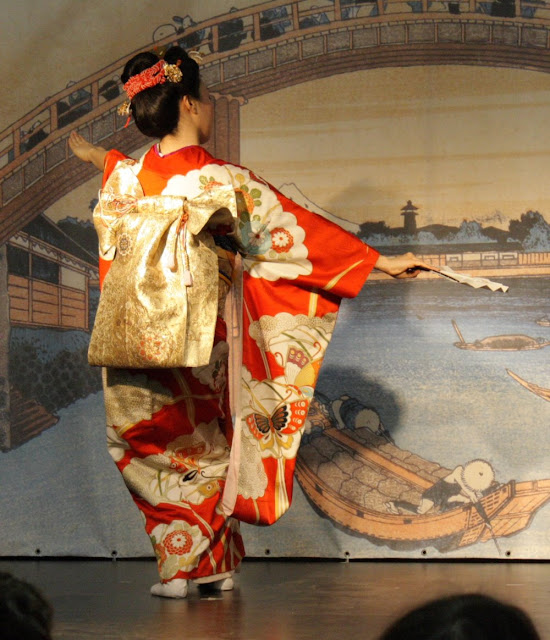 A long succession of lots of very elegant moves. 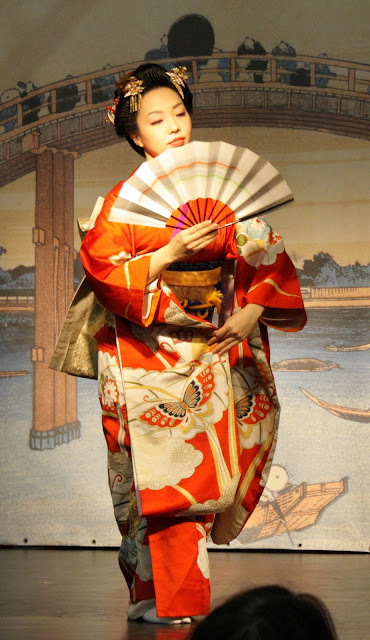 Making good use of the long sleeves on her beautiful kimono. 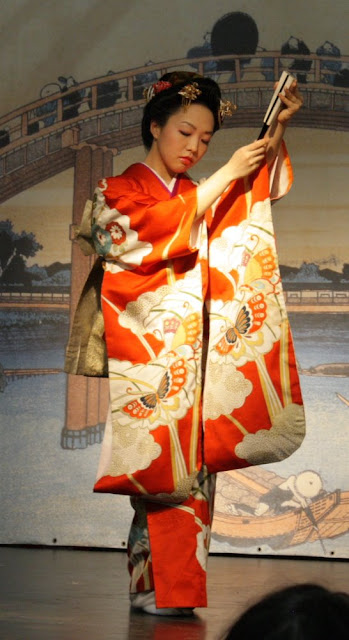 The ensemble "Hibiki" performed several traditional pieces of Japanese music. A Sankyoku is made up of a koto , a shamisen (a three-stringed lute) , played by Arisawa, Shino and the shakuhachi (bamboo flute) played by Coxall, Michael . This ensemble has been together since 2003.
You can listen to a koto here, played by Okuda, Satoshi (Utanoichi). 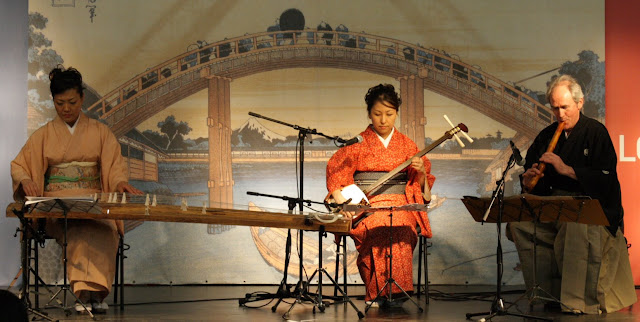 You didn't need to go up to the stage to see whether Hirota Joji & the Taiko drummers were performing. You could hear them from outside !
As you can see the women got to beat the big drum too and I can tell you they didn't hit it with any less enthusiasm or power as the men!

It was beautiful to see how everybody kept beating perfectly synchronized , even when the drumsticks went high up.

:) The female drummers smiled the whole time while the young men frowned and Hirota-sama kept a watchful eye on his pupils from the back.

"Woooh! " At the end of the performance , the sticks go up. 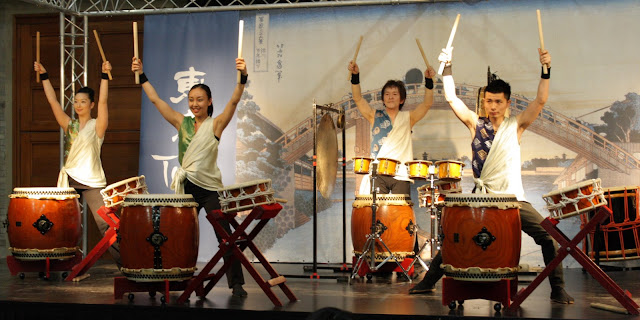 Hi Walter! Wow, those are such beautiful pictures of the dancer! She looks so elegant there ^_^

I heard that learning Nihon Buyo costs high. It follows Iemoto system (http://en.wikipedia.org/wiki/Iemoto) and is very very traditional. Koto, Shamisen & Shakuhachi are also the same. I started to learn how to play Koto & Shamisen since I was 5 years old, because my mom wanted me to. But I didn't like everything is just so old and traditional that I quit them by the age of 14 or so. Especially I didn't like the song while I played them. The songs are in ancient Japanese that were not understandable at all to a grade school kid. Not many Japanese people learn these traditional musical instruments. Instead, most of my classmates would learn how to play piano.
I really had a hard time at music class because I had to get used to Western styled music paper to play an organ, while I was good at reading kanji written music paper to play Koto & Shamisen. But my mom sent me to the teacher at the most famous art university in Japan since I was 5, where I was trained to be a professional Koto or Shamisen player, sacrificing prescious time playing with other kids. But within 10 years I just couldn't bare that and I said I didn't wanna play them any longer. It's surprising though, I know I can play them well even after decades of absence. My body remembers once I touch the strings.
I don't think I should just throw away this prescious experience. Such very Japanese-like things are not accepted with favor in Japan, but I wonder if Western people might like them.

Priscilla, hello!
I took a lot of pictures of her , the hard part was selecting only these four for this blog , haha.
That's a stunningly beautiful kimono she has on ,isn't it ?
If you want full resolution pictures of it, use the email form on this blog,OK?
I returned to Belgium on Sunday afternoon and I saw a few snowflakes in England, but in Dover it was clear. When seeing the pictures of the heavy snowfall in England the next day, I realized I had been very lucky ! If the snow had come one day early I would have had a very hard time driving back to Dover !!

Kirin, don't be sorry ;)
I'm glad you took the time to write such a long comment. I find it fascinating that you learned Koto & Shamisen. I hope you don't throw away the experience.
I don't understand why such traditional Japanese ( very Japanese-like , as you call them) are not accepted with favor in Japan. I know Western people like them ( I do and I saw plenty of others who like it at the Tokyo day ).
The songs are in ancient Japanese ?! No wonder I didn't recognize a single word.

Hi Walter,
Old traditional things are not dead but are not paid much attention in Japan. Instead, more and more Western culture are accepted with favour. In fact, you'll see how rare it is to wear Kimono or Yukata except for special occasions. We wear jeans, T-shirt, and dress like Western people. Young Japanese people do not like to live in Tatami room with paper sliding doors any more. New houses these days have no Japanese styled room at all, especially when it comes to apartment house in the city area. We like more Western foods such as pasta or sandwiches rather than traditional healthy Japanese cuisine, as spinach Ohitashi as you introduce in the above post. So I don't think Japanese top longevity in the world would last in the next century.

When I started to learn Koto & Shamisen, my friend laughed at me saying, "Isn't that too old and way behind the times? I've no idea what you're gonna do with that!" and that was over 20 years ago. Now, I see more people would learn Western music rather than Koto or Shamisen and this is not changed. Another story. I can tell you I've never met anyone who learned Koto or Shamisen around me. No classmates in my 17-year school life, no coworkers at several different offices, just NOONE but me. It's that rare in here!

So it's very fresh for me to hear how Western people liked it, because that may lead to cherish what I've learned. Thank you for letting me know that, Walter. ...Turned out to be another long comment. haha :)

I've seen the same thing happen over here : traditional music and food (!) being replaced with others from far away ( the further the better !) . look at me : I'm cooking Japanese instead of Flemish, I have five books on Japanese Ukiyo-e ( including the three on Hokusai ) and not a single one on the Flemish painters like Rubens, Van Dyck, Jordaens, Van Eyck, and so on.
Local things are too close, too easy to access , too everyday : what comes from far away has a certain attraction to it , which we find irresistible.
This was made painfully clear to me back in 1986 when I traveled to South Korea via London , sitting next to a Japanese woman on the plane. She worked at a bank in London and flew back to Japan to visit her relatives. When she heard that I came from Belgium , she explained in great detail the beauty of the Great Market in Brussels and how wonderful she found it was.
I ( the native Belgian!) had to admit that I had been living for more than 20 years at less than 30 km from Brussels ( " Oh, so you of course know the Great Market ? ) and had NEVER visited the place. She was horrified. ("NEVER ?") I felt like a barbarian, haha.
Of course I have also witnessed the reverse here : at some point people start to get overdosed on all those foreign goodies and begin to realize that there's a lot of interesting stuff right in their own country ( even if it has to be pointed out to them by foreigners ). And then they start a revival of the 'old' ways.
A healthy balance between the two seems best to me . ( The best of both worlds ).
The shamisen may not replace the electric guitar anytime soon, but don't give up on it yet. You may see a revival. We've been down the fast food road here and now things are beginning to reverse, because big waistlines are no longer fashionable.

As for wearing kimono and yukata becoming rare, check out Priscilla's blog http://kimono-daisuki.blogspot.com/ : she and her friends are doing their very best to wear as many of them as possible at each and every occasion right there in London.