Target of the Tokyo Promotion Day was of course to promote Tokyo as a touristic hot spot, and show that it has a lot to offer for every kind of tourist. And at reasonable prices too !
Every visitor got a full package of folders, with maps, hotels, places to go and places to see.
I still haven't completely read mine.

Throughout the hall were displays explaining about things to see, things to do ,things to eat and how to get around and to Tokyo.

Placards with useful information were showing us everything about Tokyo, Japan 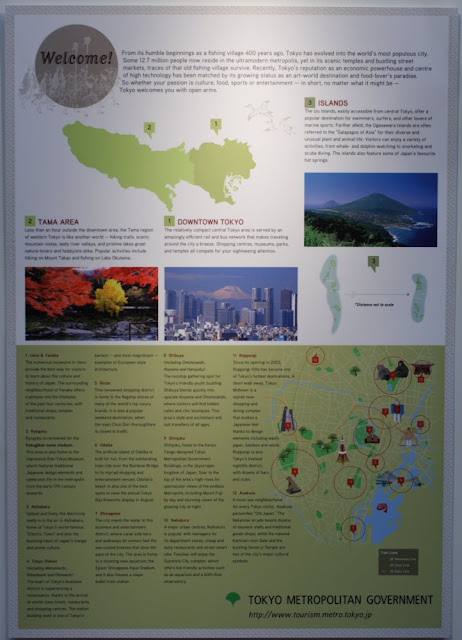 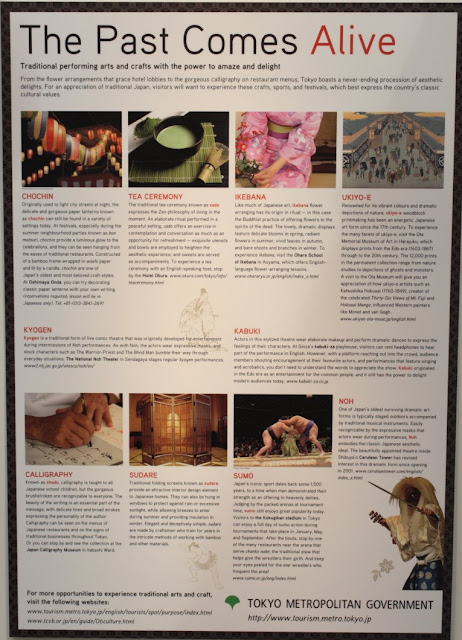 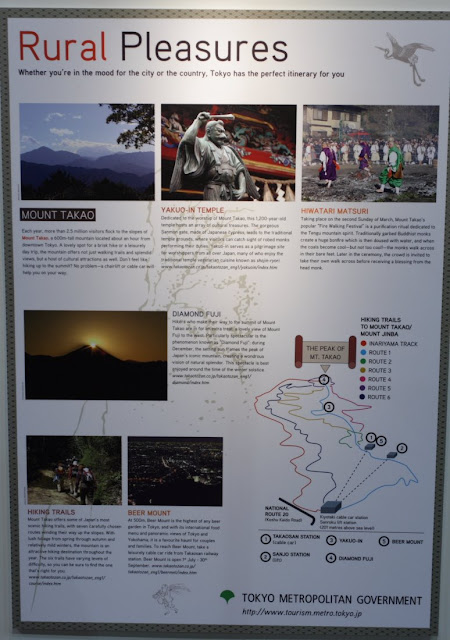 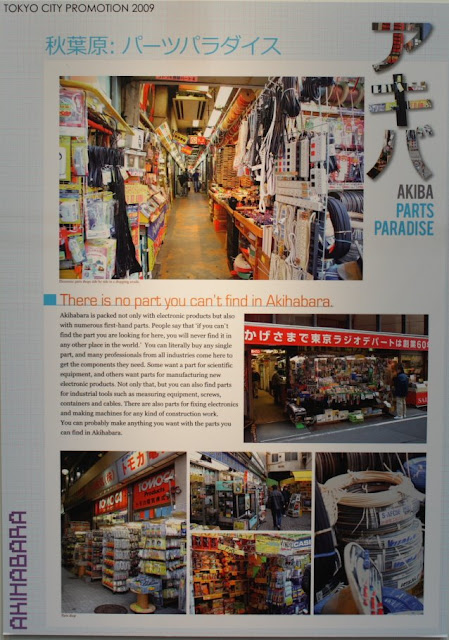 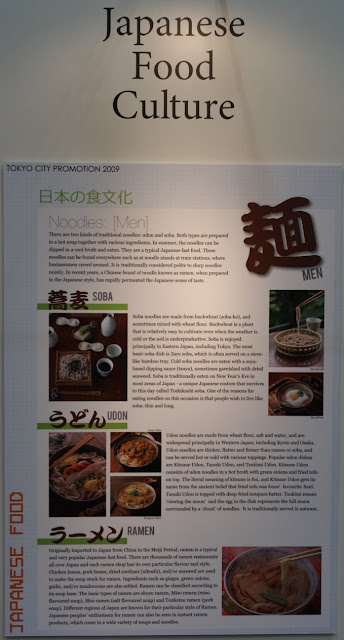 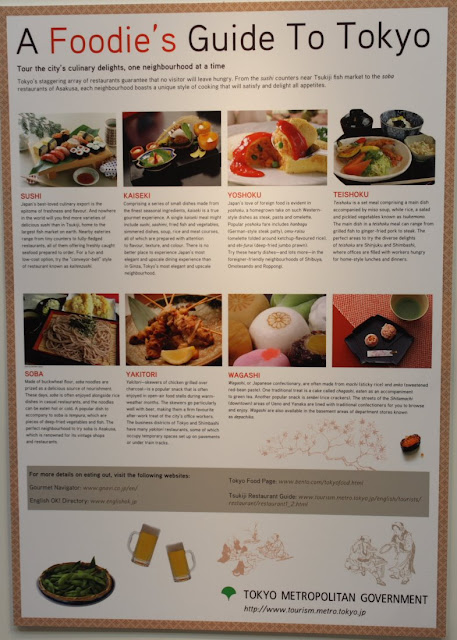 There was an anime theater (whee!) , showing all kinds of anime throughout the day.
but I found out it was dubbed in English instead of original Japanese with sub titling, so I only watched one show, ( although I really wanted to see Coluboccoro ( see poster ) but it was programmed at the same time as my reservation for the tea ceremony). 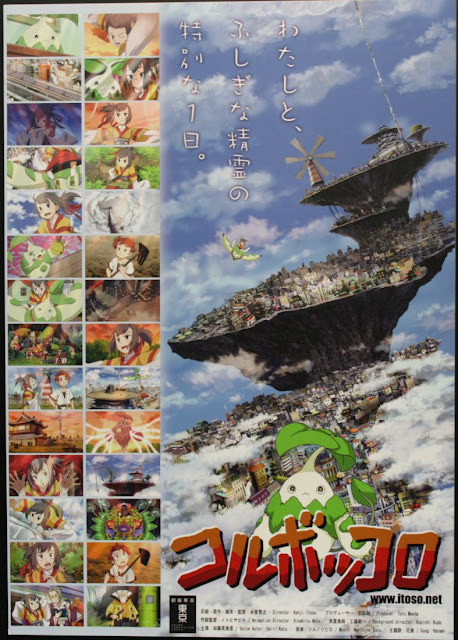 There were several traditional activities you could participate in : old Japanese games , origami ( paper folding ) , shodo (calligraphy) and a tea ceremony (sadō).


"Everybody hold your pen like this. This is the character for tree..." 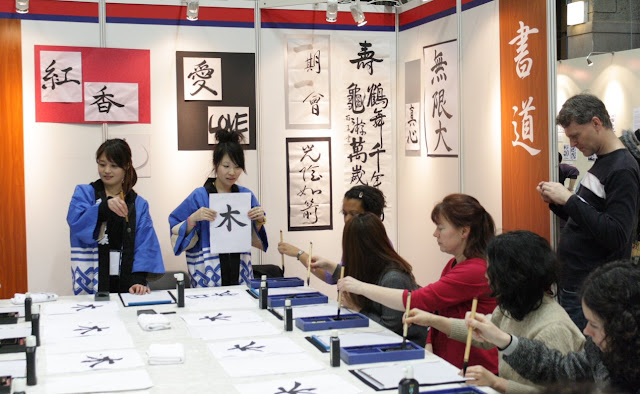 With so much to do and to see in one day I had to choose : I decided to take part in the tea ceremony, because it's the only thing I couldn't replicate at home. 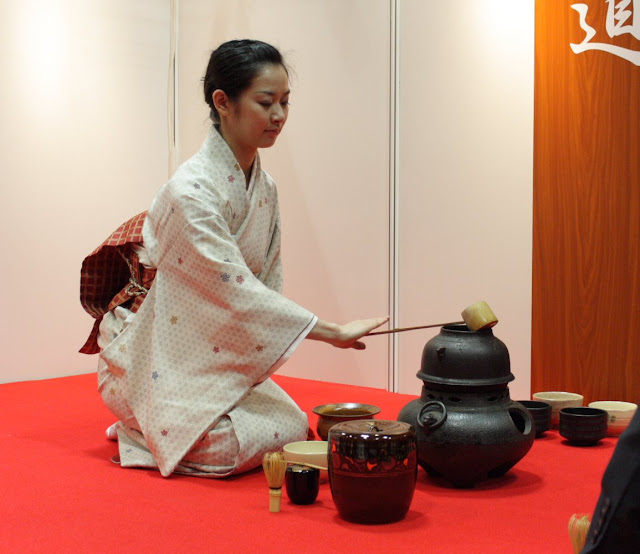 We had to sit in front of the tea lady , in seiza style. Oh boy ! Although we got a zabuton ( cushion) to put under our knees , after a few minutes most people started feeling THE PAIN and started to try and find easier positions.
This is where I SHINE! I can sit in seiza style effortlessly like forever : seven years of serious bodybuilding and stretching and running has given me legs that are very strong and also very flexible. ( Strength training shortens your muscles : you absolutely need to stretch each trained muscle for 30 seconds each after training to keep them long.) So I was able to sit there , smiling like a Buddha , while around me painful motions and shifts were being performed.

We got a bowl of green matcha tea ,a sweet on a paper and a bamboo whisk , with which we had to stir the tea in a horizontal figure of eight ( a bit more difficult than the vertical figure of eight I'm used to as a cook) and then whisk the top of the tea quickly into a nice froth ( Oh YES! That one I'm good at :I revved up the right wrist and whisked away like an runaway outboard motor , but ever so elegantly mind you : only the hand and wrist moving, while the rest of the body stayed still :).
Then we had to take the wisk out , lightly scraping it at the front, put it to one side, hold the bowl on the right hand and turn the front away from us, drink the tea in three gulps and eat the sweet. The tea wasn't very thick or bitter ( I have matcha at home that is more bitter).
Still, I'd love to get hold of a bamboo whisk and bowl and do it at home. It was a wonderful experience ! 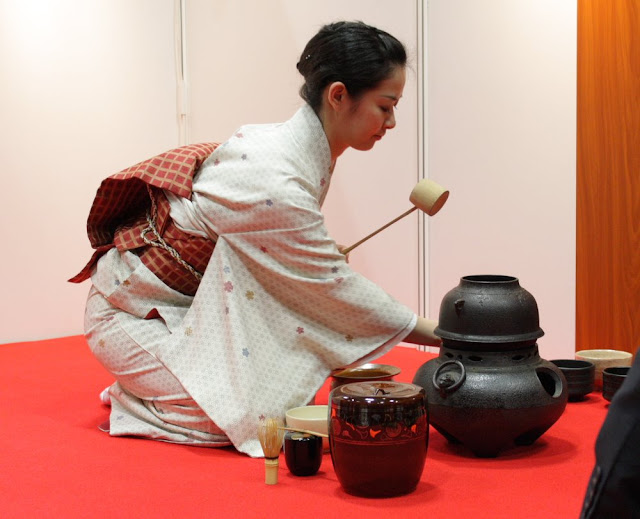 I got the chance to talk to the lady after the ceremony. She explained : " I have been studying this style of tea ceremony for seven years. But this style is not so popular in Japan these days." "Ah ? so why do you study this style?" "Because I learned from my grandmother " "Seven years ? I should call you sensei then ?! " " No no, not sensei, I still have to study a few more years before I can teach"
Ah, such modesty !

This cute little doggy drew a lot of attention : it tapped its right foot to the rhythm of the music
and responded to petting by flashing it's lights and flicking it's ears.

A young Japanese woman standing next to me said : "What is that ?" I said "It plays music.. You can pet it : go ahead. Stroke its nose" She did. The I-dog flicked its ears,flickered its LED lights and made cute little noises. She was enchanted : " Ah, it's so cuuuuute. I mean.... it's so, so, mm.., so.."
I knew just the word she was looking for : " It's .. kawai ?" " Yes, kawaiiiiiiiii !!"
I have a feeling that kawaii means a lot more than just cute.
I think it's cute , cuter, cutest, kawaii. 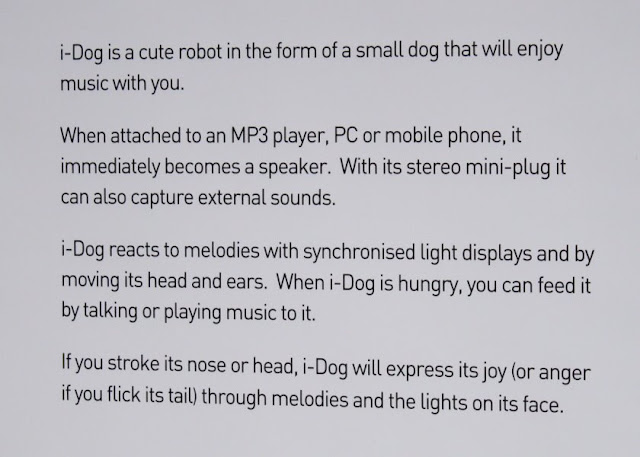 Oh, she totally wants one of those ! 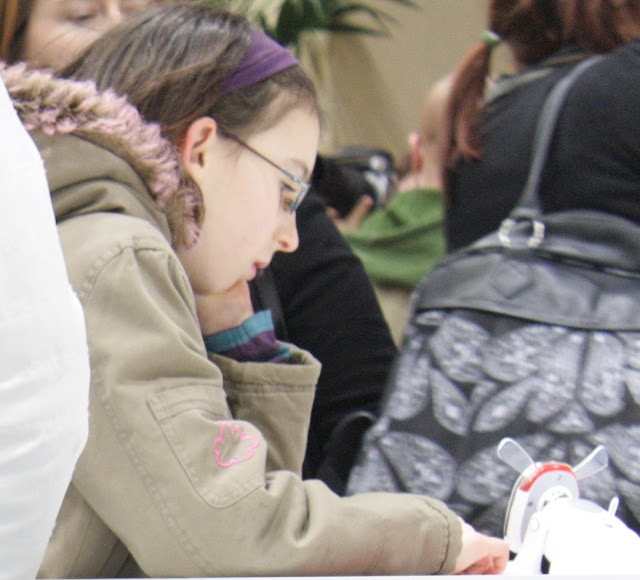 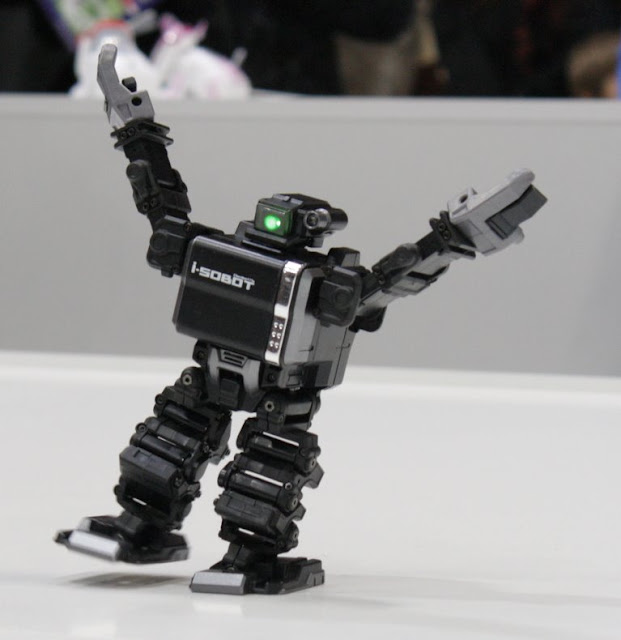 Everywhere there were Japanese hostesses in blue (vests ?) to help explain.
Here a British boy is getting vital instructions on the use of THE REMOTE CONTROL. 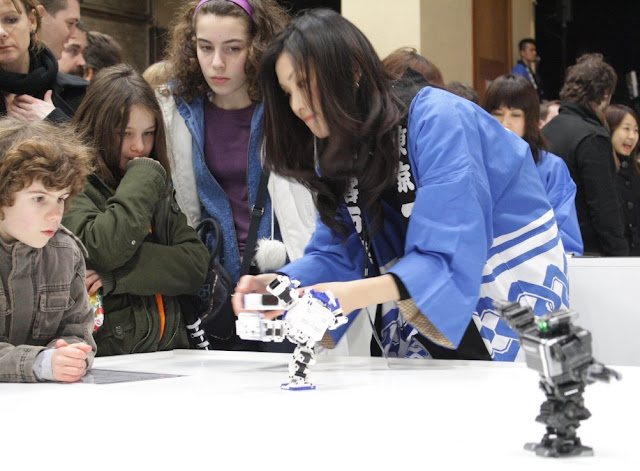 Look at the gleam in his eyes : I can see him thinking " Just add a jet pack and a plasma beam gun and I'm controlling my very own Gundam." World domination is the next logical step. 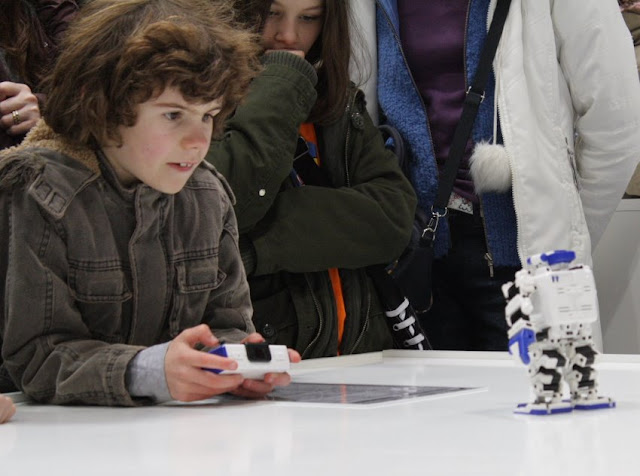 One one side , getting very little attention was this techno marvel . It plays music from an inserted MP3 player : I saw it rotate and spin to the rhythm of a pop song it was playing. Impressive. It can't do stairs , but it never rolled of its platform , it's that smart.
I'd love to get one to follow me around the house , but it would probably scare the cat 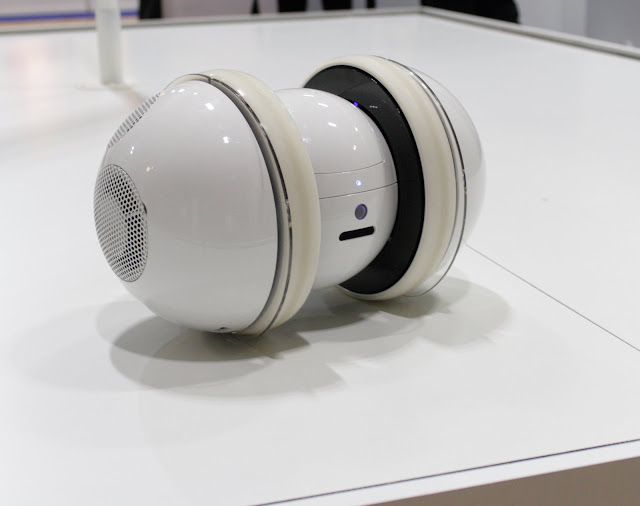 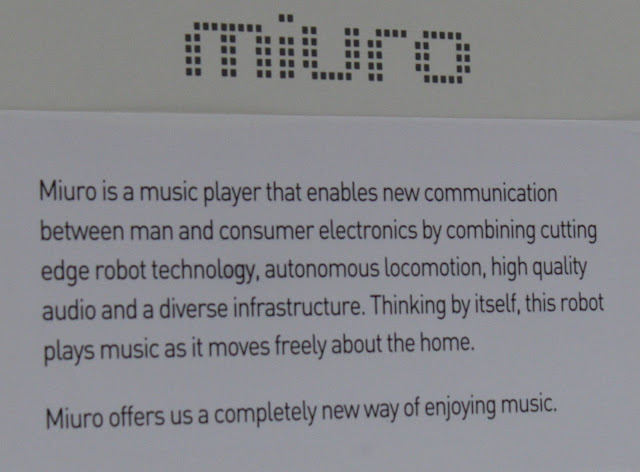 You could get your digital photograph taken and printed to take home , posing in front of two Tokyo landmarks : a tori 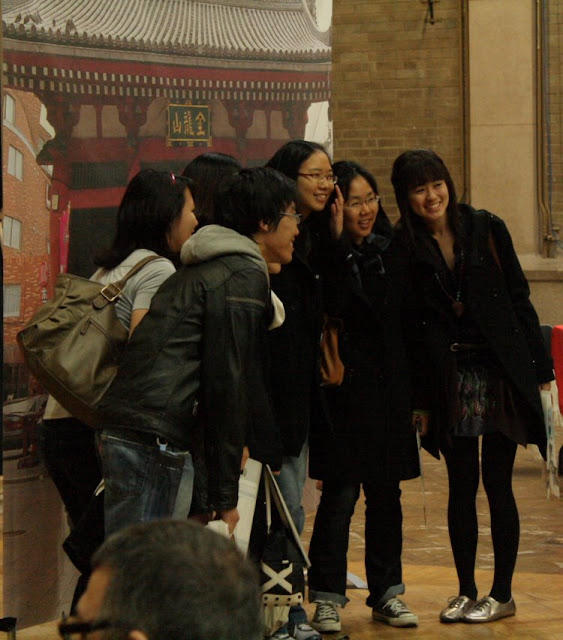 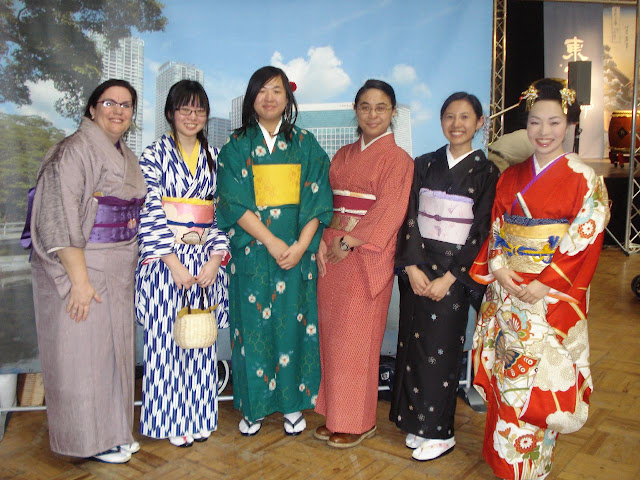 All in all , it was well worth the trip , the long freezing drive on the motorbike, etc.. but I've already blogged about that.
One day , I'll visit Japan. Till then events like this are a welcome introduction.
Posted by Walter at 19:57

Thanks for your last comment to my blog, warning the ex-links. I wonder if I may sound rude if I ask once and now that I change my mind. So I should have read his blog more carefully...:(
I don't know, but maybe he's not responding me, maybe he is. If he ignores me, I just don't chasing him any more, but if he gets back to me, then I think I have to because I started asking him first. Just in case I do not publish your comment (that warns me about ex-link stuff) OK? That message was from your kindness, which I know and is not necessarily shared with 3rd party.

Now I'd like to post my comment on your post.:)
When we play Koto or Shamisen, we normally sit with seiza style. Before Western culture is introduced, we had no chair, and that means everyone had to sit with seiza style on Tatami. Because of that many Japanese people do not have straight legs, including me, sadly. :( Especially I spent my childhood practicing Koto & Shamisen hardly and so my leg bones got bent while I grew up. It's called O-kyaku, because when one stands up with his foots put together, bothe legs shape "O" in alphabet, not "I". Nowadays our life style is getting more and more Westernized, and so, young people will never suffer from the bent legs. Their legs are straight and they are taller than old people.

BTW, you were working for body building for as many as 7 years? (o_O)!!

Thank you for your comment Kirin.
I didn't know that sitting seiza style from a young age causes bow legs.
Now that you mentioned it I have been looking at pictures of Japanese women and I can see what you mean, but I've never really thought about it before.
I don't think it makes Japanese women any less attractive, actually !

Ah and about the body building, that's a long story. In 1988 I started cycling and later running to lose weight. I also went on a 2000 calorie / day diet. Worried that I might also lose muscles ( because of a strict diet ) I started weight training. Without knowing that doing these three are the best combination to lose weight , after several weeks my weight started to drop quickly. Convinced that I was losing muscle tissue, I started studying bodybuilding and trained even harder. Of course , after 12 weeks, I had went from 83 to 69 kilos but I was now training with 50 percent more weight than before. But I still worried !! haha!
Only then did I discover on the Internet that I was doing it the right way. I had gained muscle and lost fat.
All that worry for nothing ! I liked it so much I just kept on doing this more and more for 6 more years.
It was a lot of work ( and time ) but I was totally fit.
Until september of 2006 , I took on a very difficult project as project manager and soon I started working longer and longer hours. I tried to get more time to rest by doing sport less and less till may 2007 , I had completely stopped. Bad mistake!
After the project was over last year, I was so tired that I fell sick for a long time.
I'm working again now, and 3 weeks ago I finally started to jog again. It will be a long time to get where I was before, but I'm confident I can do it again. At my peak I was around 76 kilos, now I'm almost 90 ( AAAgh!).
I think good Japanese cooking ( vegetables and rice ) and small portions are going to be a big help :)

Hi Walter! I'm envious that you got to do the tea ceremony! I've only ever seen tea ceremony twice: once at a talk in the British Museum, and another time here at this event. I don't know if I actually have the patience (or leg strength :P) to sit still for so long haha. But still, I think it will be very peaceful and calming to watch others make tea from afar (as long as I don't have to participate :P) in a quiet setting like a tea room :)

I really admire your ability to sit seiza style! I can't sit in that way for very long - ten, fifteen minutes at most. ^^;

I wish I had more time to look at the robots, but my friends weren't too interested and didn't stop by to look at it, so I couldn't :( Thanks for sharing these photos!! ^_^

I've read all your replies to me, but sorry I have no time to write to them each. (Actually writings are very interesting.) It's just so interesting to find people like to know something from other culture because their home culture is so everyday thing, which is so true.

Hello Priscilla. Yes I was very fortunate to participate in the tea ceremony. What do you think of the kimono the tea-lady is wearing ?
Ah, you like the robots too ? You can buy the iSobot on amazon. If only I could teach it to pick up after me, my house would be so much less 'disorganized'.
You like the pictures? I wanted to get shots of how the people were interacting with the robots instead of simply shooting the machines on their own.

Hello, Kirin.
I understand you're very busy ;) Aren't we all too busy all the time ?
It's OK for me if you have no time to reply to them all. I'm happy you find my replies so interesting.