I learned the proper technique to make thin sushi rolls ( hosomaki ) and reverse sushi rolls ( uromaki) in London with Ikeida Atsuko quite a while ago,so  I decided a few weekends ago that I'd practice my technique. I cooked about 4 cups (600 grams) of rice.
(Big mistake , I had to make so much sushi and  because I also took photographs I spent more than 3 hours in the kitchen , haha ! )
( click on the pictures to see a larger version )
While the rice was cooking , I prepared strips of avocado ,cooked thin asparagus, strips of carrot, lightly cooked in a little water till they were done but still firm , strips of cucumber and strips of smoked and fresh fish ( tuna and salmon ) and surimi (aka imitation crab sticks). Too much of everything, but you can always eat what's left :) 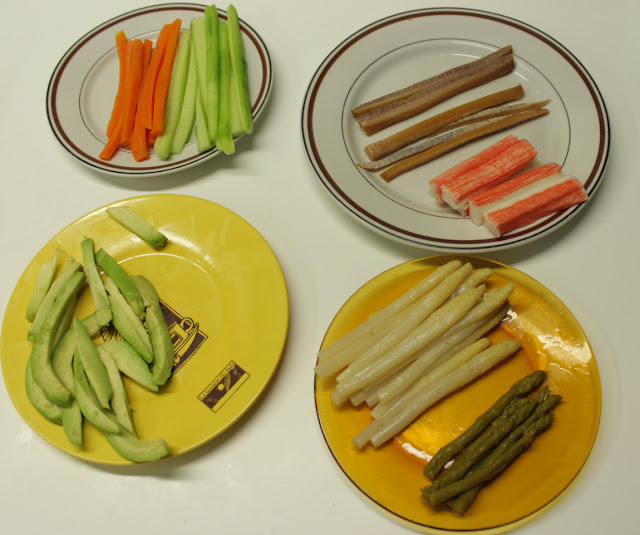 I also used strips cut from a fillet of smoked herring , because I like the flavor. 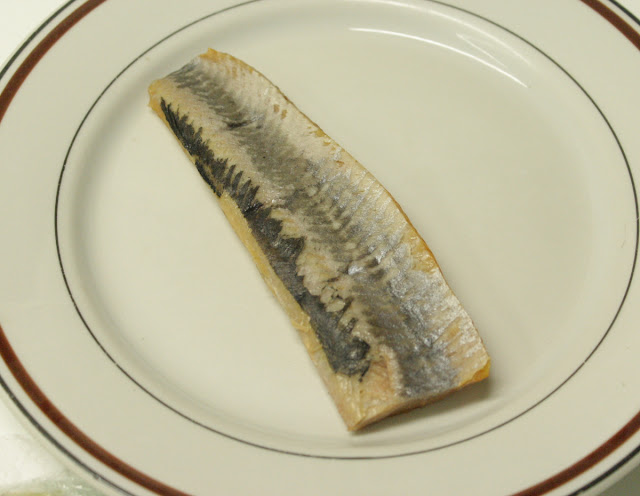 The warm rice is put in a hangiri (wooden tub) which has been rinsed well with water so the rice doesn't stick to it. Mine is about 40 cm wide.
(I had already used half the rice, before I took a picture.) 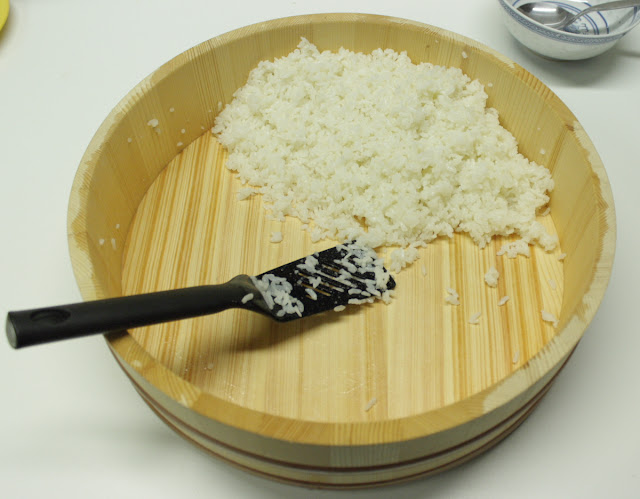 Then I add a mixture of 2 parts rice vinegar , 1 part sugar and a little salt ( for 600 uncooked grams of rice : 8 tablespoons rice vinegar, 4 (unheaped) spoons of white sugar and a teaspoon of salt ), using a spatula to fold it through the rice , while fanning it to cool down.


Fanning makes the rice nice and shiny. At first it usually appears too soggy and I used to worry that I put too much mixture on it, but I find it always absorbs the mixture. Keep the hangiri covered with a clean cloth or dishtowel to keep the rice from drying out.

To roll the reverse rolls (uramaki) you definitely need to cover a makisu (bamboo mat) with clingfilm, to keep the rice from sticking to the bamboo.
One uramaki , just made , on the clingfilm covered makisu.

For hygiene, I wear latex  gloves when making sushi ( I need XL size cause my hands are so big : I buy these from an industrial tools shop in town : most supermarkets only have S, M and L) 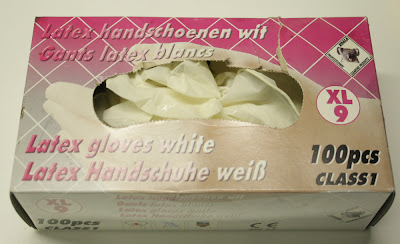 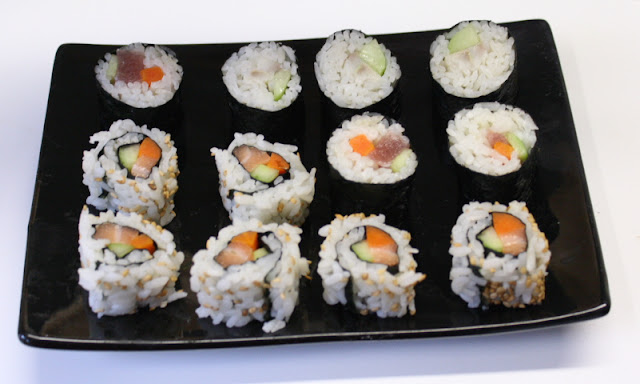 A hosomaki ( thin roll ) and an uromaki ( which traditionally is made square ). I'm still practicing on the squareness, even though the ones I see in Japan Center aren't that perfectly square either :)
Did you know you have to let sushi rolls with nori on the outside sit for several minutes before cutting them ? The nori absorbs some of the moisture of the rice , sticks better to the rolls and make it easier to cut. 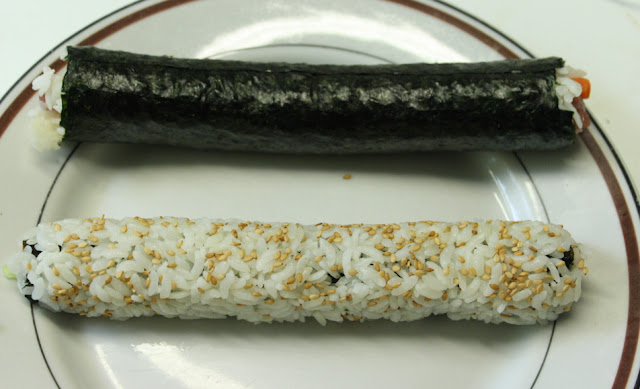 Hosomaki with crab stick carrot and avocado. I used to use my very sharp sashimi knife to cut the rolls, but I found a very sharp deba (shown underneath ) is even better. I use Japanese Suehiro waterstones of 1000 and 6000 grain that let me get a razor sharp edge. If you're not used to sharpening and honing knives , have them sharpened. It's not easy to do it properly. 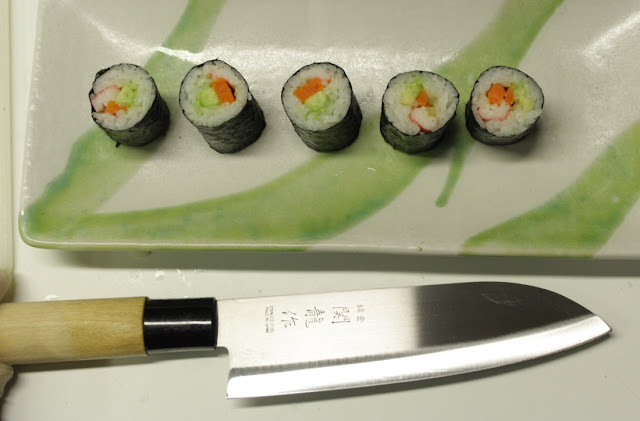 Two more uramaki rolls , the top one covered in sesame seed, the bottom one in fish roe. 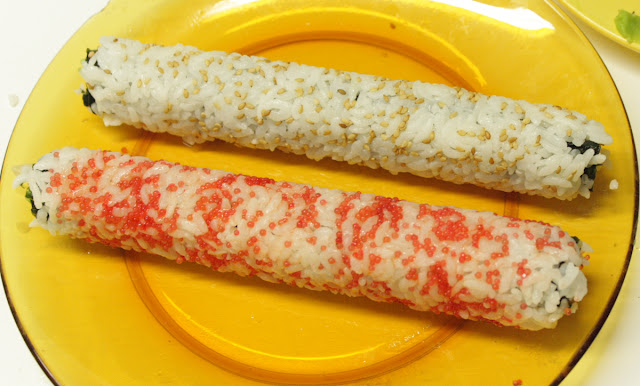 The important thing about uramaki is that you have to keep wetting your hands : the rice sits on the outside and is very sticky. It's easy to forget and before you know the roll comes undone.

Not all my sushi works out though. I really like the rather large and beautiful rainbow trout caviare ( I use it a lot when making sashimi ), so I made a thick roll with rainbow trout on the outside. It still looked OK when in a roll, but when I cut it , 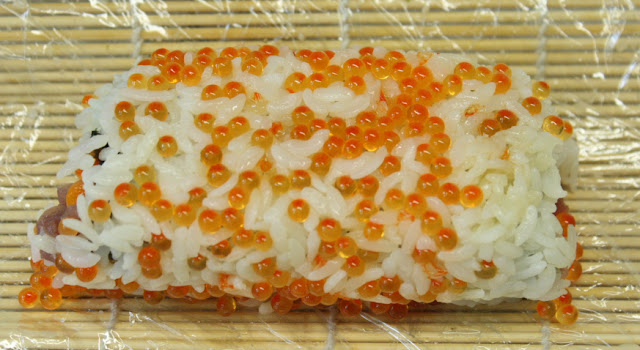 all the eggs fell off : they didn't stick to the rice. Nothing to do with the rice, it was sticky enough.
Also, there was a bit too much filling. 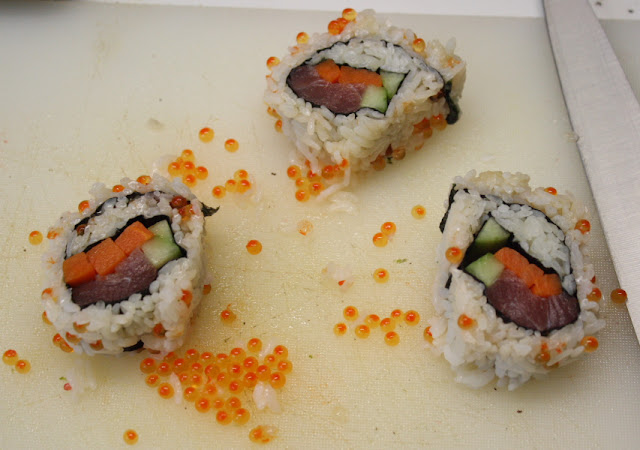 I'm sure the Japanese have had the same experience with salmon roe, so I cut strips about 1 inch wide and 8 inches long. Out of a small golf-ball sized lump of sushi rice I shaped a flat round shape .,wound a strip of nori around it , leaving a little bit of nori around the top end to hold the roe.
A small dab of wasabi on the rice , arrange a coffee-spoon of roe on top. 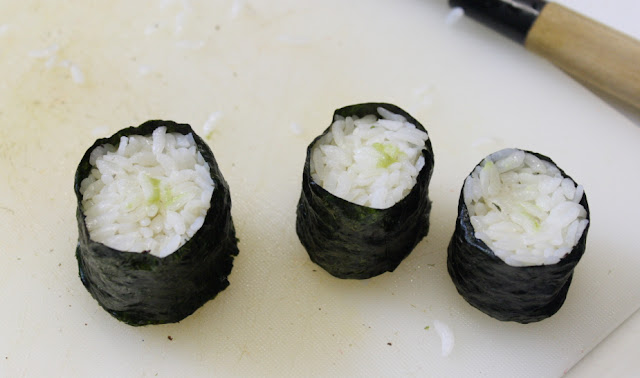 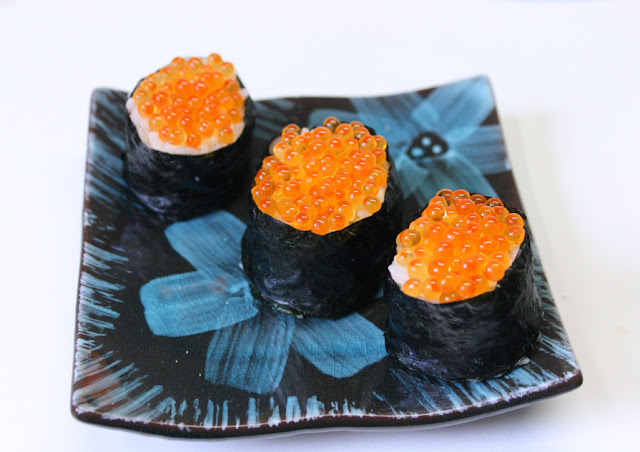 I liked them so much I immediately made four more. 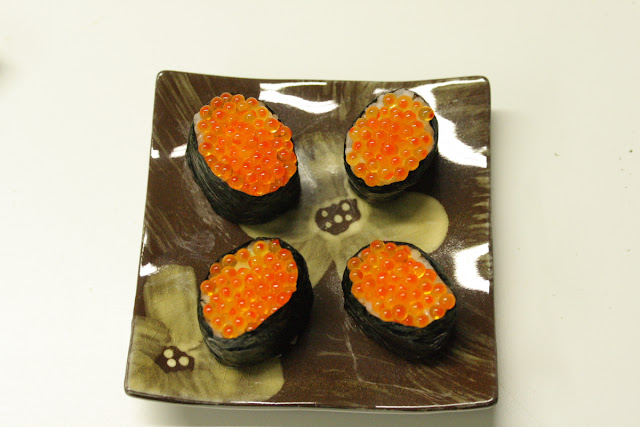 You can wash the commercial packaging of sushi you buy in the shop in the dishwasher at 50 °C ( put the transparent tops flat, or they'll deform, the bottom are much stronger ) and package your sushi to take away.
These are thick uramaki with sesame on the outside ( 2 strips carrot, 2 strips raw salmon, 2 strip cucumber). They're harder to slice , because the rice isn't held together by a nori sheet on the outside. Use a sharp knife and clean it on a wet towel between each cut.

Needless to say, I spent that evening and the next day eating LOTS of sushi !

Lovely sushi!
I'll bet it wasn't too bad eating them for two days! ^_^

It wasn't too bad :) The tough part was trying to stop eating one more, and one more...

How beautiful and they look so yummy! If I were there, I'd offered to help eat them. :p
I feel hungry now...They look so so kawaii and nice.
Please make them for me if I visit you in the future. hahahaha ^___^

Thank you for the compliment, Kumiko-san! I'm still learning how to make them more quickly and cut them properly each time. I still need lots of training ^^