Looking at my book shelves I see too many cookbooks with recipes from all over the world gathering dust. This year I've decided to take a trip around the world of my cookbooks and start cooking at least 2 recipes from each one. This will definitely take a while :) but what better way to spend time in the kitchen?
I'm not saying sayonara to the Japanese kitchen, just taking a break now and then.

The first country I 'visit' is Hungary , where they really love their paprika's. The most traditional dish is gulyas , a soup of beef, onions, carrot, potatoes, tomatoes , bell pepper and large amounts of powdered paprika.
It's been cooked since the Middle Ages in an open pot over a fire , by Hungarian 'cowboys' that drove their herds of cattle from Hungary to other countries. From that humble origin, it evolved to become the national dish of Hungary. 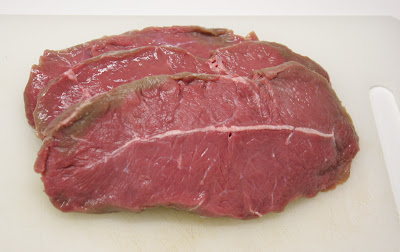 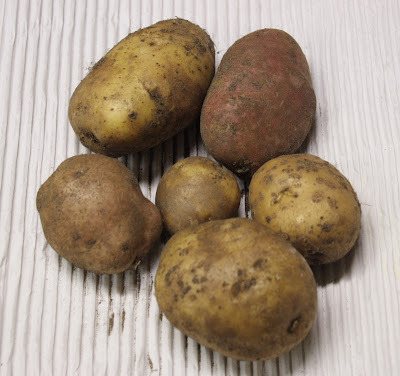 - two large red bell peppers
- one or two large carrots
- a handful of parsley ( the original recipe calls for a parsley root which is a bit more
aromatic than parsley, but I can't find it in my country, I'll have to grow my own )
- a can of tomatoes , about 400 grams with the juice ( you can use fresh, but most fresh tomatoes are picked too green these days and then artificially ripened , because they bruise too much when picked ripe, whereas these Italian tomatoes are ripe when canned) 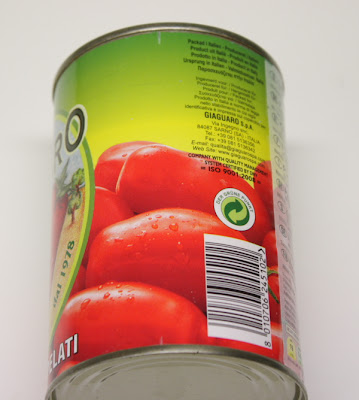 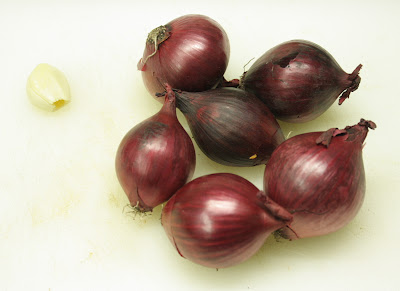 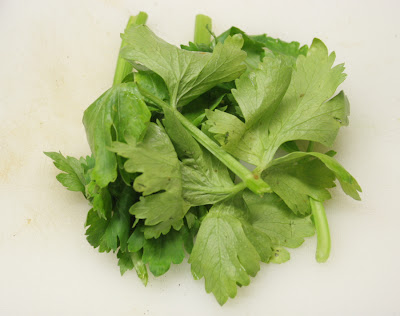 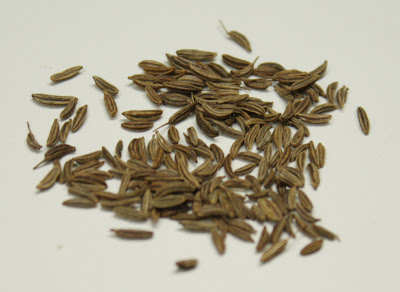 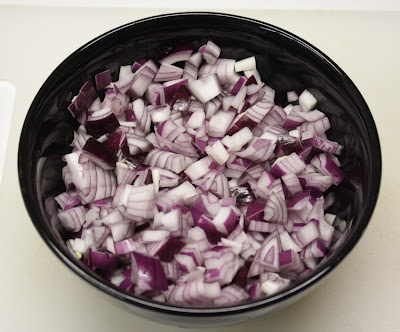 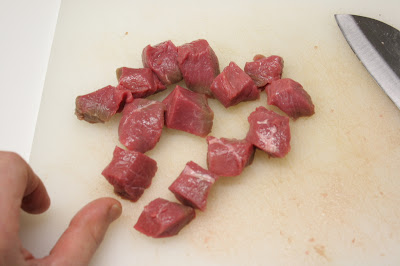 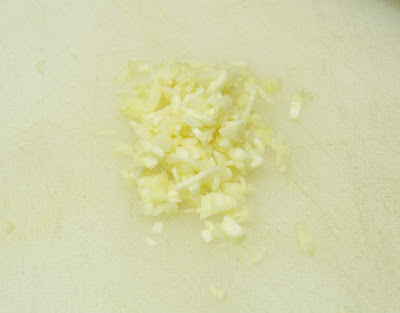 In a large pot (this one is 26 cm ) , heat two tablespoons of olive oil or fat 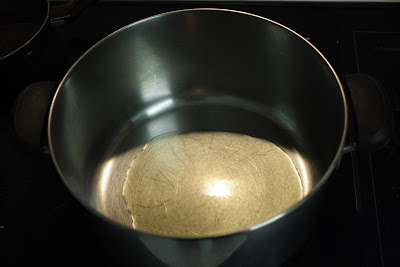 and stew the onions on a low heat , stirring frequently for a few minutes. 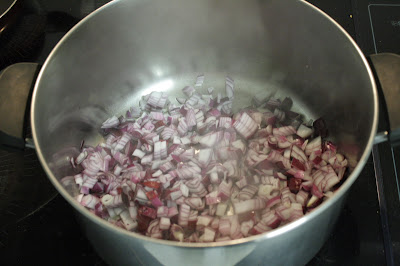 Add the caraway ( or cumin) and the garlic.
After a minute more , add the beef cubes.
Take the pan of the fire. Add a tablespoon of water. 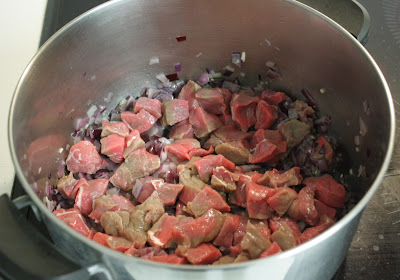 Cover the meat with 8 or more  heaped spoons of sweet paprika powder ( Hungarian paprika if you can get it :)) 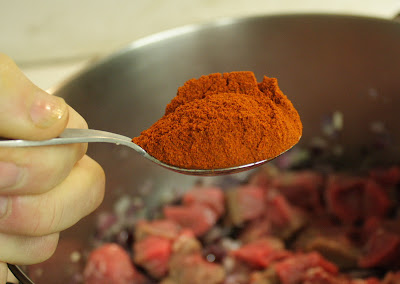 You need  a thick layer of paprika powder ( I weighed it and it was about 120 grams of paprika ). 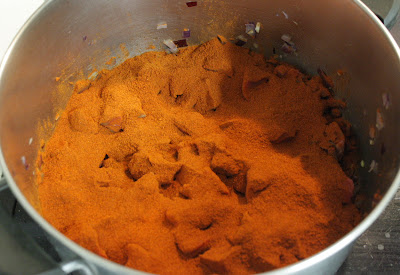 The paprika will bind the soup, you don't use flour to bind it.
Close the lid and simmer on a low heat (electrical setting 3 out of 12 ) till the beef is half done, for about half an hour.

While the onions and the beef is simmering , cut your bell pepper along the lines and cut a circle around the green stem. That way you can easily remove the stem along with the seeds and the white membranes. 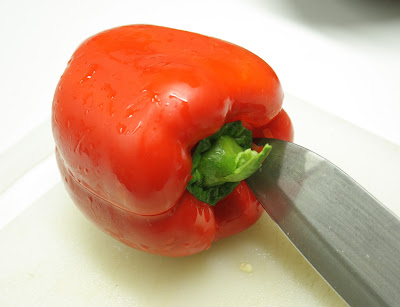 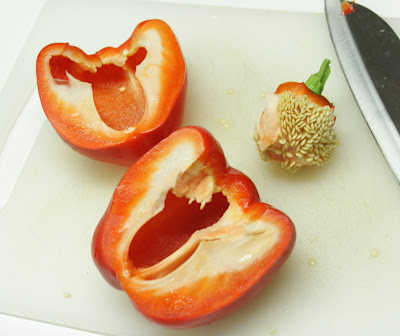 Cut the parts again if you have more than 2 membranes.
To get rid of loose seeds sticking to the inside of your parts , hold them with the outside up and tap firmly with the flat of your knife to make the seeds fall out. 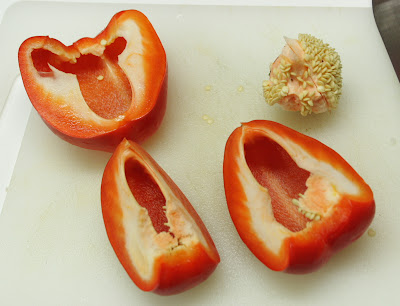 Skin the carrots ( I do it by pulling the back of the knife or the sharp edge of a smaller knife along the skin , which works much faster than peeling them with a peeler ). 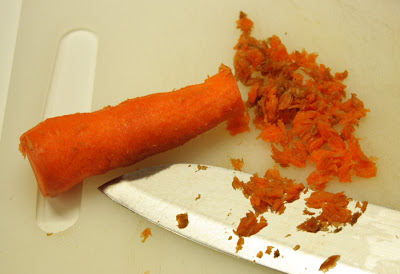 Chop your carrots and bell peppers in half centimeter chunks, finely chop the parsley, roughly chop the celery and divide the tomatoes in four. 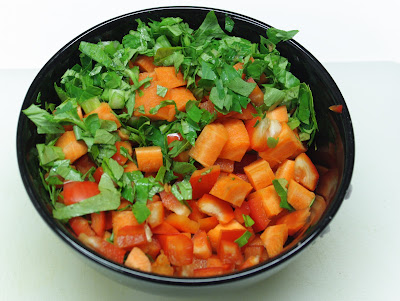 The beef is half done by now and the paprika is absorbing the juices from the meat nicely. 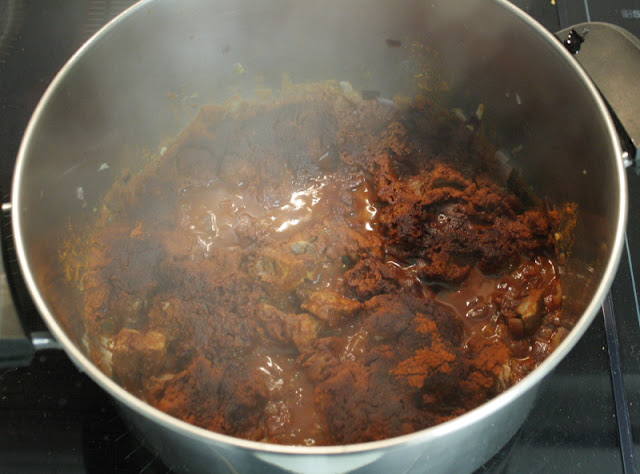 Put the vegetables on top of the meat  and add about  1,5 liters of cold water . 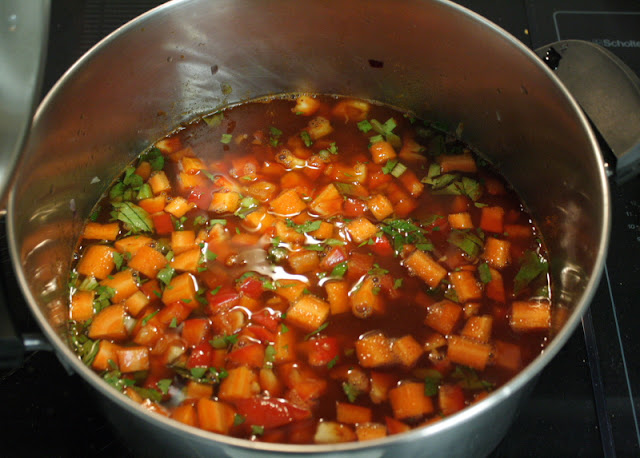 Cover again with the lid and let it simmer for half an hour.
In the meantime peel and dice your potatoes to cubes about a thumb thick ( 1,5 - 2 cm ) 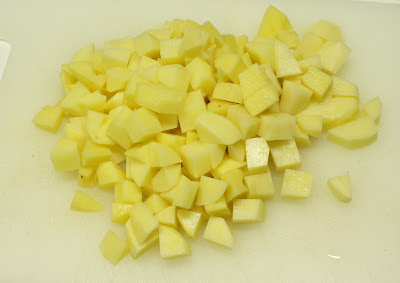 Add the potatoes to the soup, stir and keep it on a low heat till the potatoes  are done (cooked but not falling apart. Check your potatoes regularly , so they don't overcook. 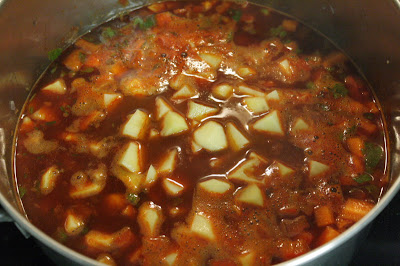 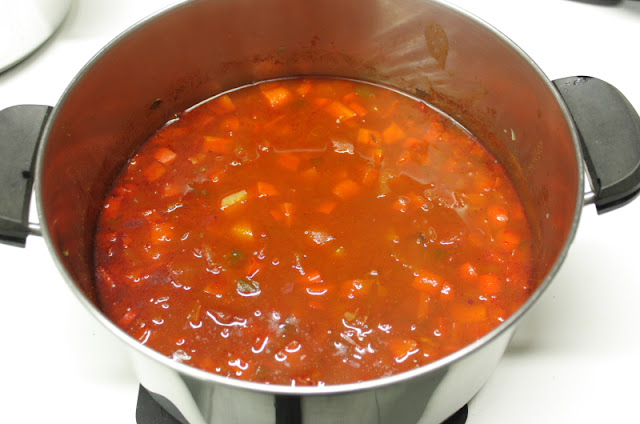 A few cups of this and you too will have the energy to drive the herds over the steppe on horseback :) 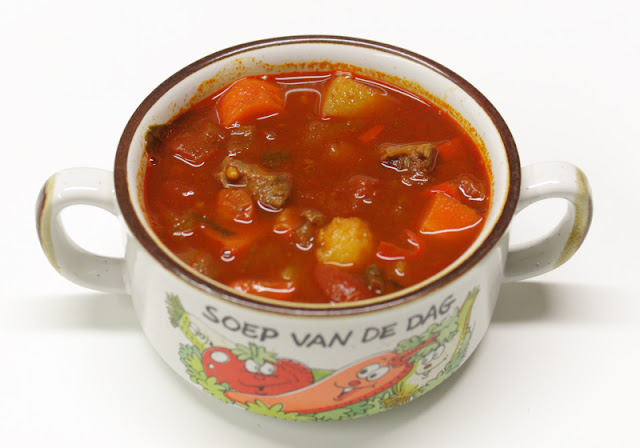 If you'd like even more paprika ,the Hungarians usually served some roasted paprika with their bread and soup!
Posted by Walter at 20:09

They sure like their paprika! :) I've never had gulyas, but I honestly not sure if I'll like it (just because I don't like large amounts of cooked chunky vegetables), but I'll be willing to try it so who knows? So next time you'll make that, I'll make sure to stop by for dinner LOL :) :) :)

Lyuba , it IS chunky , but that is also one of it's charms : the pepper and onion are soft, the cubed meat is tender and the potatoes and carrots are just right. And everything is surrounded by this wonderful full flavour of paprika.

Ray, yes it is real yummy ! Paprika is good for your health, too :) It really warms you up in winter. As good as a kotatsu :)