Spring is coming and summer isn't too far away, time for another traditional recipe.
This one comes from the center of Belgium, where the cooks use beer in the kitchen even more cheerfully than the French cooks use wine !

2 bottles or 0.75 liters of REAL BELGIAN gueuze ( there IS NO substitute )
( click on this picture to see it in large scale glory : you can almost smell it ;) 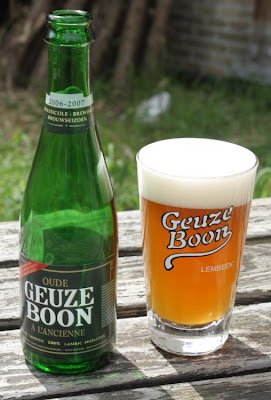 ( try a dry lager if you can't find the real thing , the result will be good but different )

I'm making this dish with about 600 grams of lean mixed minced meat
so I use only one yolk and a thinner slice of bread.
Trim the crusts of your slice of bread ( I prefer brown : it adds character! ^_^) 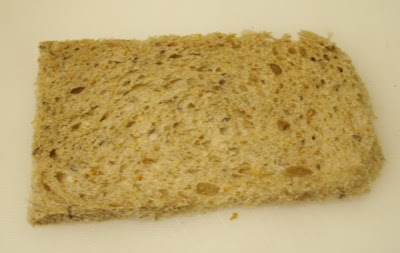 Let the bread soak in some milk . 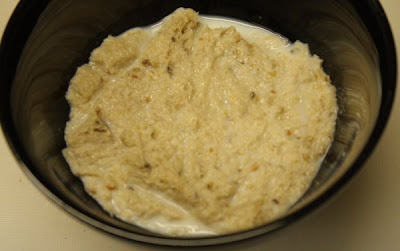 Add your egg yolks to your minced meat.
Grate about a fifth of a nutmeg (I guess about 1,5 teaspoon ;)
on your meat and add some pepper. ( 4-5 turns of your peppermill ) 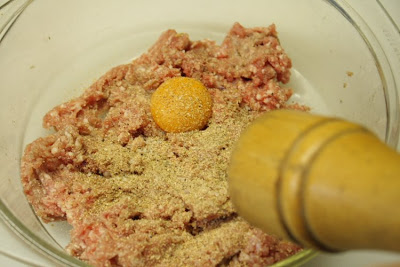 Now squeeze most of the milk from your bread which should be nice and soggy by now, add it to the meat and knead it all firmly to a nice mix with your hands.

Use a spoon to scoop some mix into your hand and form into balls of a size you prefer.
Rub your hands with a little water, but not too much or you'll find the minced meat
slides around instead of rolling into balls! I use the spoon to scrape the meat of my palms every now and then. A spoon also lets you measure the same amount easier than when you try to scoop some up with your fingers. 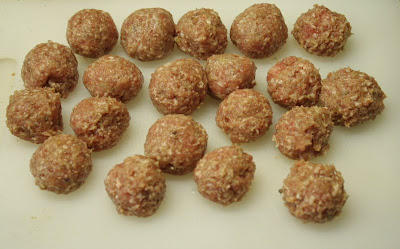 Melt some butter in a frying pan ( I used a non stick wok ) and on a fairly high heat ( 7 out of 12 electric) brown the balls on all sides in 2-3 minutes ( they shouldn't be cooked through yet ! ) 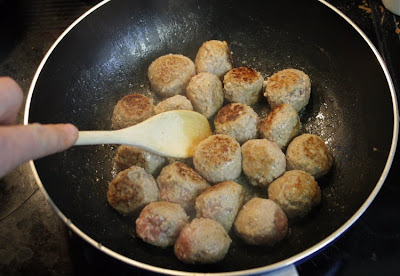 When done , transfer them to a large pot , so they're all on the bottom.

Pour your bottle(s) of gueuze over them to make them happy , put the lid on and let them simmer on a low heat for half an hour. 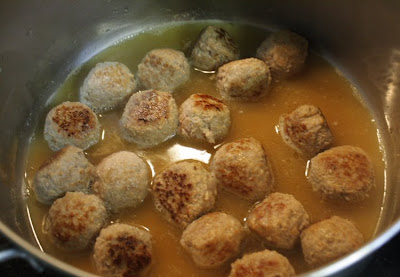 The original recipe does it all in the same pot and then calls for
degreasing the sauce, which I find a bother.
My way leaves most of the fat behind in the frying pan so you don't have to do this. 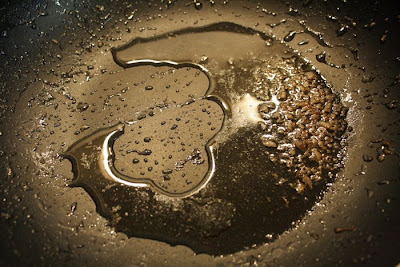 Make a tablespoon of beurre manié by mixing a tablespoon of oil or butter with flour. Keep adding flour till the mixture becomes a smooth paste that is nearly starting to crumble. Try using a neutral oil ( first pressed virgin olive oil can be taste a bit too strong ) 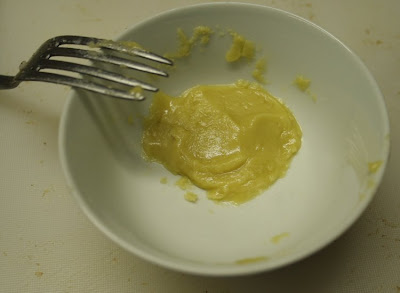 Scoop the balls out of the sauce and put in a warm dish.

Whisk the beurre manié lightly into the sauce to bind it ( it never gets really thick , but that's not what you aim for anyway so don't worry ). Beurre manié is the same mixture as roux , but roux is cooked by heating it and adding the liquid beforehand. Such as in white sauce. Beurre Manie is added after the cooking and binds for a shorter time , which is fine because you'll eat it right away. 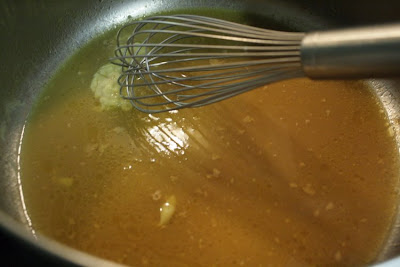 Pour the sauce over the balls in a dish. Ready to enjoy!
(click on picture for a mouthwatering larger view O_O ) 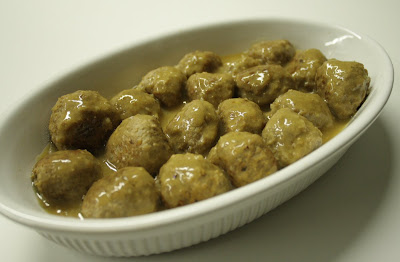 Because of the gueuze the sauce has a nice slightly tart taste (tart is slightly acid but nicer ;) which goes very well with the tenderly cooked meat (ah if only I could post the SMELL !)
You can cover this in foil and heat up later in a microwave but it is hard to resist eating it right away! Serve with ample slices of bread ( you will need them to mop up the sauce ! ).
Posted by Walter at 21:29

i'm tempted to try it!! though i have to look out for pork mince, they were cheap last week and i hope they still are on Thursday :(...

what is geuze though? can I just use normal beer? I think the only Belgian thing we have is Stella Artois and Hoegaarden. The rest is mostly German brews.

Geuze (or Gueuze ) is a beer made exclusively in Belgium by mixing old and new lambic , to produce a beer that foams ( lambic doesn't ), but you'll be hard pressed to find it abroad.
I have a nice explanation on lambic in my april 13 post : Cherry blossom viewing

Still it would be interesting to try it with white hoegaerden ( I think I'll try that myself ! ).

Cooking with beer is an adventure ( some beers become slightly bitter others more sweet some become inedible! ). I tried this with Leffe brown and it was a bit characterless.
The tart ( slightly acid ) taste of the beer sauce with geuze was totally absent.
As a Belgian I'm against drinking Stella , which is a product of Inbev ( totally industrial ) , sadly Hoegaarden was a privately owned beer , has been bought by Inbev and the quality has suffered.
Ah, if only I could let you taste some of the 400 real Belgian beers we have here.

do also try my other recipes ( just click on the label 'food' to see them all ) especially the Rata , haha.
Go on , be brave and let me know how it turned out .

Oh wow, this recipe certainly brings back memories! ^_^ I had this before a long time ago, but I don't remember where ^^;;; Still, I'll have to try this recipe soon! I think I might be braver to try this than to try the coffee one :P

If it was with Geuze beer , almost certainly in Belgium, I would think. But you can always try it with another beer.
It's an old traditional dish.
Like beer soup ,beer pudding ,mussels in beer etc..

I made this last week!

Although, mine ended up really soupy. But it was yummy! The Hoegaarden was something different! Generally I hate beers, but the Hoegaarden had a really different smell and aroma to the local Aussie beers. It made the sauce (soup?) real nice!

Being the chinaman that I am, I had mine with rice hehehe :P

Ihsara! Glad you liked it ;) which Hoegaarden did you use ?
Try mixing in a bit more beurre manie next time or let it cook on a low heat a bit longer : the water will evaporate till the sauce thickens.
The sauce never thickens completely , it's always slightly runny, which makes it great to mop it up with a slice of bread or with rice.
Too much beurre manie would make it taste of flour too much.

i used the witbier one :) its the only kind they sell here~