Of all the typically Japanese foods I have tried , I had not been able to try natto ( fermented soy beans) yet. No shop in Belgium has them and it wasn't until I travelled to London that I was finally able to buy some.

They have a lot of interesting articles at Japan Centre on Piccadilly , but no natto! Aaargh! 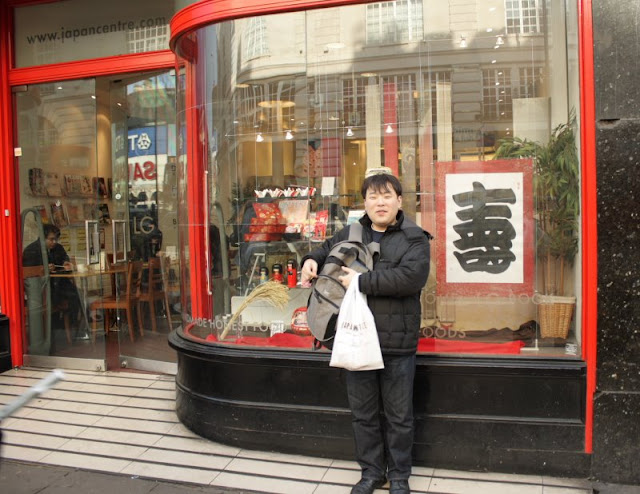 Fortunately a Japanese lady, living in London was so kind to tell me about a shop a few streets further on where they did have the REAL DEAL ! AT LAST !

Thanks to the cold weather I got home safe with my frozen treasures.

The smell ( which you read so much about on the Internet ) is not bad. I can identify the mustard, but the other two ? Too much kanji. 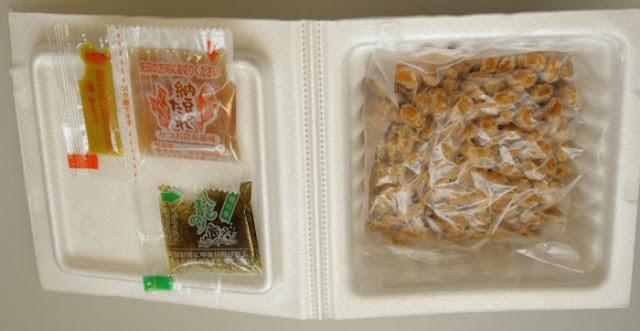 Sure , it looks a bit odd, with the sticky threads trying to hold the beans together, but so what ?
I eat half of the natto, just plain without any sauce, to make sure I know what they taste like.
They're rather soft, a bit crumbly ? but not bad. (click on the pictures for a better view !) 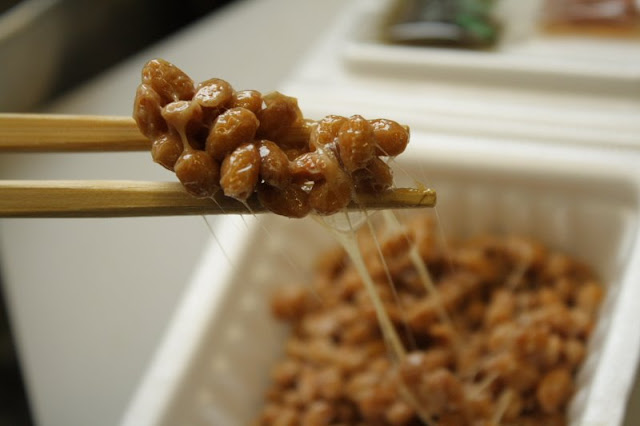 Together with the mustard and the green ( whatever it is ;) it tastes a bit more interesting. 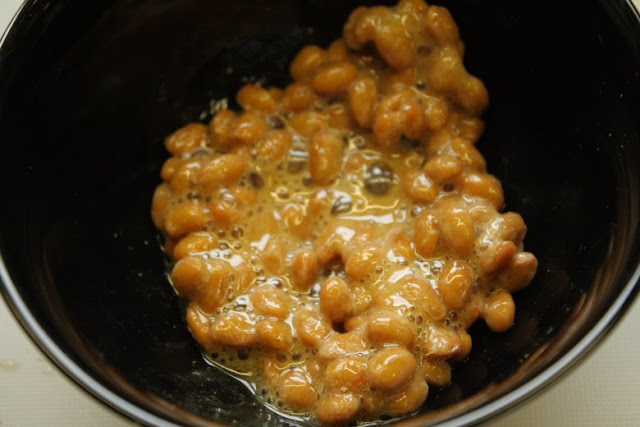 The threads stick a bit to your lips and teeth , but nothing out of the ordinary.

I have no idea what the sauces are , because I can't read the kanji (yet) : any suggestions ?
Click on the picture to get a larger version 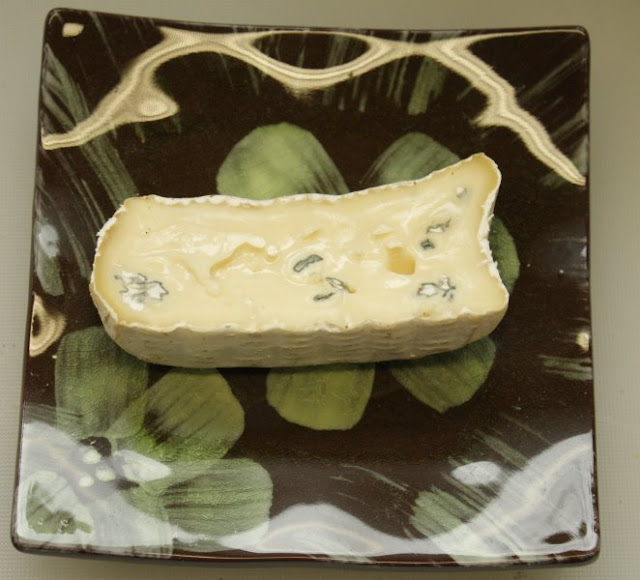 but definitively less than for instance this French Roquefort. 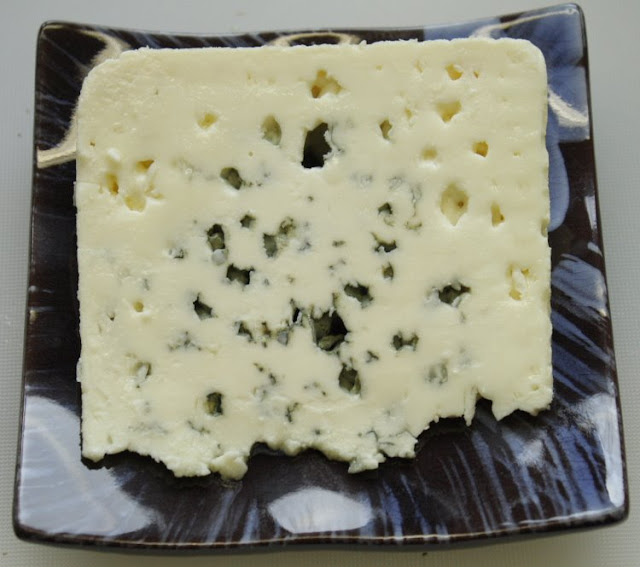 I think a dislike of natto depends on what you are used to. We're always scared of what we're not used to. ( except for me , because I'm always : "What this food ? I don't know that ! I MUST TRY this ! )
Look at this cheese : it's a typical semi-soft cow's milk cheese from France ( we have them in Belgium too ) with a red crust. The red crust is a mould, which is a fungus.
( click on picture for a better view) 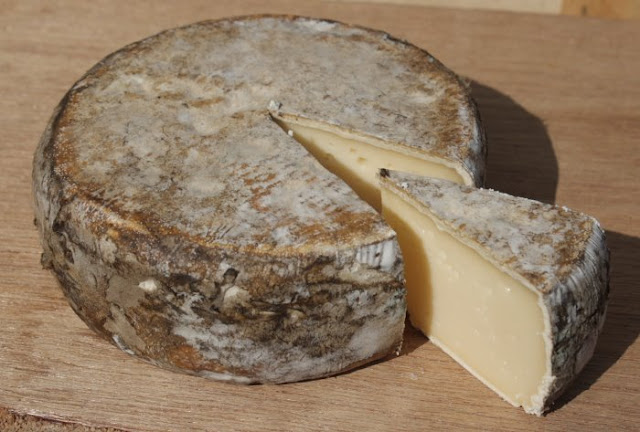 Mold is something you don't want on your bread or on your fruit , but in the case of such a cheese , YOU EAT IT !
Look carefully at the picture, there's also some white and grey mould there.

In Belgium ( and France ) we have many soft cheeses with white mould or red mould on the outside. If you're not used to it , I can imagine you'll go "Yuck!".
Same thing with Natto.

As for strong smell and strong taste: let me introduce you to one of our ancient and very local specialities ( only in Belgium ) , the world champion of smelly cheeses :
our traditional Brussels Cheese ! It's world famous ( especially in Belgium).

Almost all semi soft and hard cheeses are made from curdled milk, by pressing the curd into shapes and rubbing the outside with salt.

This cheese is made from skimmed milk. The curd is mixed with salt and hand kneaded, then the cheeses are dried on straw in freely circulating air ( the farmers used to do it in the loft under the roof) until it becomes dry and hard.
The crust will develop a shiny glaze because of the thin layer of bacteria growing on it.
Then it'll be ripened by humidifying it and rubbing with salted water for several months.
Before sale it'll be bathed for a few days in salted water and again in tepid ( in between warm and cold) water.

The result is a unique cheese that has 0 percent fat. ( Yes , ZERO ). Ideal for dieters.

It's also fairly salty and has a strong taste , so you can only drink strong black coffee with it , hehe , no other drink can stand up to its taste, wine would taste like tap water , beer like watered milk.
As for the smell, it's right up there with sweaty horses ( on a summer day after a long run ), old boxing gloves ( right after a long training ) , I LOVE IT. Have some for breakfast, you're instantly awake, haha.

Unfortunately, the last big producer of this original delicacy near Brussels has stopped and sold his factory ( the land on which it was built has become very expensive ! We can thank Europe for that ) and only a few small true cheese makers remain.

For you , my cherished readers, I have spared no effort , money or time to locate and buy one of these real traditional Brussels Cheeses!

Doesn't it look lovely ? (click on the pictures for a larger view ). If only I could post the wonderful strong smell ! 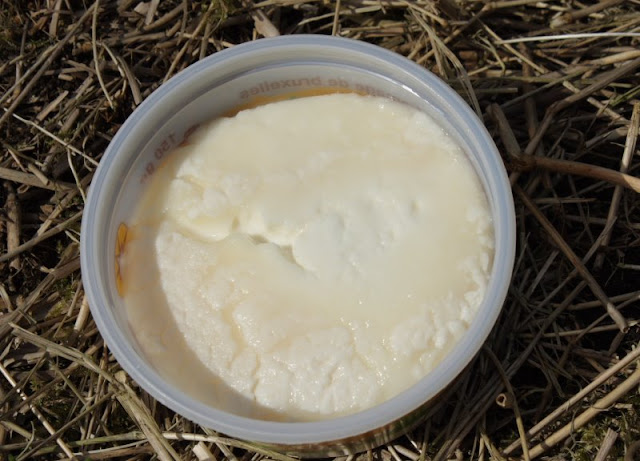 If ever you visit Belgium , pay me a visit. We'll eat some together on a slice of my delicious home-baked bread and drink strong coffee with it.
Posted by Walter at 22:02

Mmmmm cheeeeese :D I tried natto once and hated it! I'm not sure why, but I think it was the overly strong alcohol smell haha. Still, that was before I began to really like all sorts of cheese, especially the kinds with mold in them, so I may have to try natto again! :D Maybe I'll take a leaf out of your book and have the one with mustard. I heard that it takes away some of the "bad" taste.

Oh yes cheese. Belgians eat on average almost 12 kilos per year ( 30 % of which are Belgian cheeses )
Amazing really, because the belgian public hardly knew that our own country has an almost endless variety of cheeses ( hundreds ) of every type .
That's also typically Belgian.
Since 1998 they have been promoted on television. Most famous was the commercial " One piece of each " where a ( badly informed ) Belgian tourist wants some cheese after dinner and when the waiter asks him : " Belgian cheesetable , sir ?" he asks for " Belgian cheese ? Give me one piece of each ". The waiter goes " One of each? You're sure ?" and points to a table that goes on and on and stretches out of the restaurant into the yard. Hahaha. Priceless.
I found one link to a small picture of this here :
http://www.belgischekazen.be/BENL/site/download-popup.aspx?enc=P%2btpBDlo9ysoUxTuVI6QITlAEa%2fTonk%2b4wPxN0yNvzKWzjI9P4BtJzufgf8ZmVHNDUd6lidMjrpFehbgd%2fPkBA%3d%3d
It should have been on youtube, really.

Last time I emailed that the green colored sauce and the brown one were optional, but sorry, both can be used at the same time. I bought Natto with 2 sauces today and found I was wrong.
I usually buy the brown colored (bonito soup based) sauce and mustard combination and so I was almost forgetting about the green (beefsteak plant) sauce. :) Sorry about that.

Hellow! First, there is nattô in belgium, I already eat it a lot of time now ^^"! You can find some at the Tagawa store in Ixelles (Brussels) where I go when I'm out in Brussel with my best friend (just after a korean or jap restaurant).
Now, your cheese intrigues me a lot (since I'm very curious and that I like to taste new things too lol), I guess I never eat this one! I hope I'll have the opportunity one day ^^! Friendly

Hello Koara , sorry for not responding sooner :) Good to know that natto is available at Tagawa in Ixelles, because I already shop there :) Thanks for the tip.