Recently, while stocking up on food in Sun-Wah supermarket
I found this Chinese delicacy. 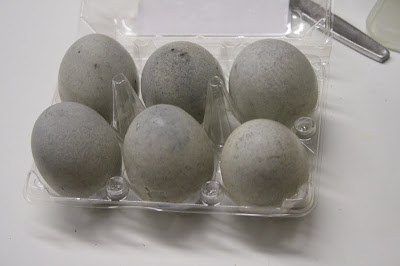 These are 6 preserved duck eggs aka thousand year old or century eggs.
They're preserved by covering the egg in a mixture of clay, ash, salt, lime, and rice straw for several weeks to several months, although modern methods use a brine of salt, calcium hydroxide, and sodium carbonate which does the same but more quickly. The story about using horse's urine is a complete fable ;) It's impossible, since urine can never be alkaline enough. 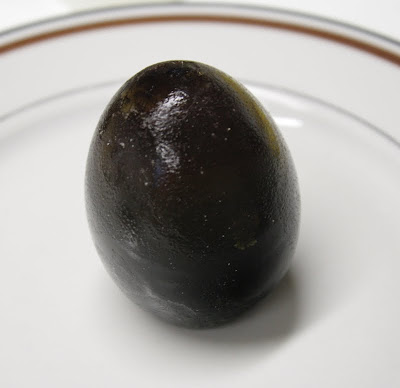 When you halve it , you see the white has become solid firm and jello-like transparent brown.
The yolk has turned dark green and creamy and smells strongly of ammonia. 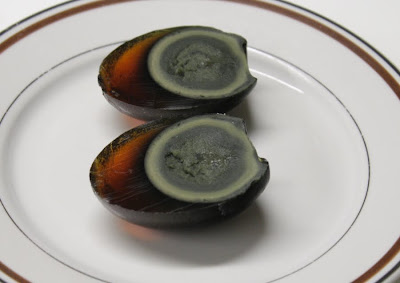 So what does it taste like ?
I ate the first one with a spoon ( I know NO FEAR ) : the white has little taste, but a texture like very firm aspic
the yolk is creamy , a bit salty and the fume of ammonia that evaporates in your mouth would probably turn a lot of people off.

Since I have 6 , I made a dish with tofu , ginger, spring onions and a sauce of soy sauce and sesame oil ( I'll post pics when I make this again )
and this morning I made a Chinese "Old and fresh egg omelet" for which I invented a recipe , as I can't find it on Internet.

Peel and slice a preserved egg from top to bottom. ( This one has a very large yolk) 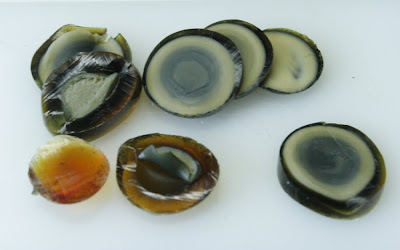 Whip 3 fresh chicken eggs in a bowl with a dash of oil and water. (Adding a teaspoon of water to an omelet makes it fluffier as the water boils off when poured in the pan ) 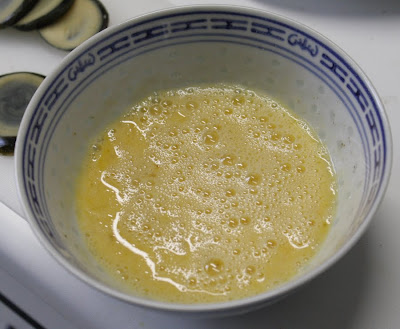 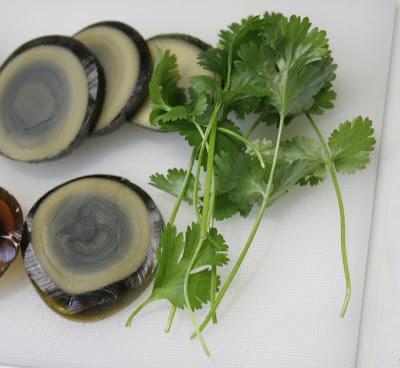 Heat a very lightly oiled non-stick pan on a medium fire, pour two thirds of the mixture in and turn the fire to low.

Arrange the sliced egg in a decorative way on the omelet.

Tear the fresh leaves of coriander up and put them on top of the eggs. 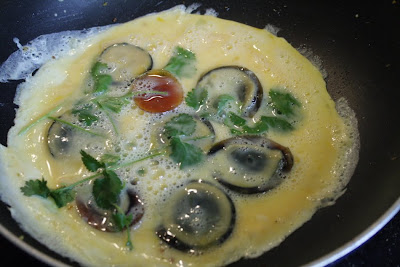 Cover with the rest of the whipped egg, put a lid on the pan and cook on a low fire for another 4 to 5 minutes
I lightly seasoned the omelet with freshly ground white and black pepper , in order not to mask the taste of the preserved egg.
Eat this with a slice of bread or steamed rice. 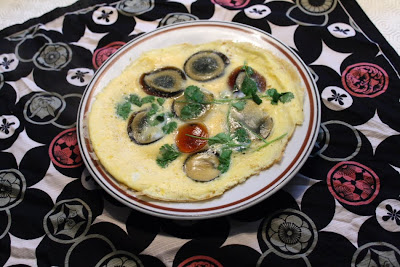 It looks so decorative ! ( click on the pictures for a mouth-watering large picture )
Please note my genuine Japanese Furoshiki ( wrapping cloth ) underneath ^_^ .
I used it just for the picture of course , I removed it for eating :)

This dish is enough for two persons ( I ate the whole lot myself , I was hungry this morning )

How healthy is it ? It's no different from fresh eggs.
According to this article from China it has almost the same composition as a fresh egg.
I have 1 reservation : the 3rd method in this article uses lead oxide , which is poisonous. Eggs made with that method should be avoided. The ones I have are made in Europe where lead oxide is illegal, they're OK.
Posted by Walter at 11:40

Was the cold tofu recipe something I had mentioned? I do remember typing it out somewhere, but I don't remember where ^^;;; Maybe the IG forums? I love eating that one!

Yumm your omelette looks soooo goood! *drools* Next time you can try it in a different way: add some boiled and chopped salted eggs and steam it! Much like the way we ate it at the MCM Expo in May ^_^

My mum likes to eat these eggs with pickled ginger (the pink kind you get with sushi). The taste is very delicious! In fact, just a few weeks ago, I had tried a new century egg dish: quarters of the egg and pickled ginger and some fresh herb (not sure what it is, but it looks like coriander) wrapped in a thin rice pancake that was steamed and looked very much like Vietnamese rice rolls. Yum!!

Hi Priscilla. Glad you like the omelet ;)
No, I found the recipe on the web.
Thanks for the tips on cooking them in different ways. I always have the pink ginger with my sashimi ;)
Yeah I remember the dish from the MCM .
The taste was rather less strong that time. That's why I ate the first one without anything else to see what it's original taste is, just like I did with Natto

My mother uses those eggs when she makes congee.

She would mash the eggs with the washed uncooked rice and then cook the congree as normal. I can't describe the taste the eggs gives to the congee but it is nice.

I personally never ate one as it is, I am not that brave.

I'm not that brave either. But I enjoyed reading your text!

Hats off to you for trying it! I'm Chinese and I haven't dared to touch that egg - ever. LOL. It's too pungent for me. Chinese people usually eat this with congee, so it's really refreshing to see you do something different with it. :)

Although it's almost the same as a fresh egg I've heard that the cholesterol is a many times higher. Not sure how true it is though. But do try to eat it in moderation. :)

just bumped into another thousand year egg. strange coincidence since I had never heard about them before reading your post!

Hello Kitty : thanks for the tip. I searched for Chinese congee and I found a recipe with three (3!) thousand year old eggs and a salted egg.
So I have to find a salted egg before I can cook that one ;)

Hello Evy : They're not well known by Europeans , I suppose. I'm surprised you bumped into one so soon after.Please tell us how you did that?

Hello Ivy : Oh, you don't like them ? That's interesting to hear from a Chinese. Hehe, ^_^ I just have NO FEAR when it comes to eating. Check out my post on Japanese natto and cheeses and you'll see what I mean. As a cook I want to find out the real taste of an ingredient without anything else so I can figure out how to use it in the kitchen.
As for cholesterol level, it's the same in preserved and normal eggs.
The Chinese article mentioned above confirms this.
You also call them pidan ?

Everybody : don't worry about eating eggs ( one large chicken egg contains 215 mg of cholesterol , a duck egg about 612 mg)

So the omelet above gave me about 1250 mg of cholesterol.

Recommended intake of cholesterol for adults is 300 mg per day , your body will produce more of itself to get a total of about 1000 mg per day.

How come I'm not dead already from an overdose ?

Without going into detail about LDL and HDL ratios it's too much fat and sugars (carbs) that drive your cholesterol level up . Should you not believe me, read this story about a man who ate 25 (YES 25 !) eggs EACH day for 15 years . He was healthy and 88 years old. Enjoy ;)

In the meantime , eat balanced meals and don't be scared of a few eggs.

Wow, I've never seen or even heard of such egg! And how brave you are! I cannot imagine I would feel like trying it even if I find it. (0_0!)
But your omelet looks good. I could eat it in that way. :p

Hi Walter! I had to search for it!
I have been visiting some of the Europalia expositions. On Monday I browsed their webpages. here is where I found the other egg :-) : http://www.bozar.be/dbfiles/webfile/200910/webfile98485.pdf
on page 6 of the (dutch)pdf

Salted duck eggs now I like those! You should be able to find those in the same shop you brought the thousand years eggs. Warning, they are a bit temperamental. Sometime they are very salty and other times they are bland.

My mother makes her own salted duck eggs but this is only possible if you are making a lot of them like 4 dozens but they do keep in the fridge.

I was told by mother that a good salted duck egg is when the yolk oozes oil when it is cooked.

I'll admit I am not a fan of century eggs myself. (Although my mom and sis will happily gorge themselves with it!)

And I'll also admit that I love salted duck eggs! Goes well with congee too but my favourite style is stir fried mud crabs with salted duck egg yoke. Yum! I should post pictures up of all the various dishes we have here which use salted eggs.

Your a brave man Walter, brave man. Just looking at those eggs are making my stomach turn!

Well hello, H. ;) Welcome! I'm glad to see another member of your group ( which I once jokingly referred to Priscilla as " the Kimono gang") has found it's way here.
Yes they're an acquired taste , to say the least.
Eating them pure as I did is not for the faint hearted , haha !
If the sight doesn't repel you , the smell of ammonia will.

"Eating them pure as I did is not for the faint hearted , haha !
If the sight doesn't repel you , the smell of ammonia will"

Sumimasen, Bangasa-chan, I didn't mean to upset you and your stomach.
Quick go read my post about Belgian chocolates ! :)